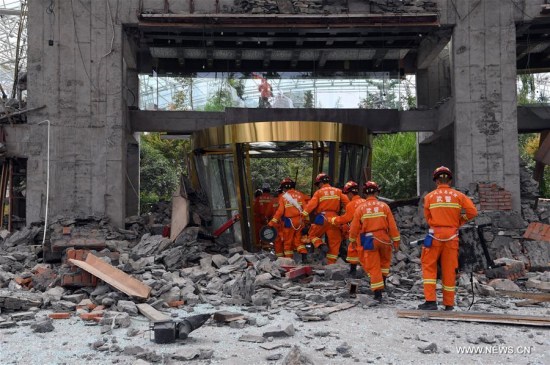 Rescuers were still searching on Thursday for more people that might be trapped in the mountainous area of the earthquake-hit Jiuzhaigou in Sichuan province, while the death toll climbed by one to 20, according to local authorities.

Ten people who had been trapped on the high mountains in Jiuzhaigou were evacuated by helicopters on Thursday afternoon, and four other people remained missing there, said Qumu Shiha, deputy director of the disaster relief headquarters.

Armed Police and some professional rescuers were still attempting to find the missing people, he said.

"We won't give up as long as there's a flash of hope," Qumu said.

However, the National Meteorological Center predicted light to medium rainfall at the quake zone on Thursday night and Friday.

Zhang Fanghua, the center's chief forecaster, said the rain might hamper traffic and slow relief efforts. Given the quake has caused some potential geological hazards, rescuers should also watch for secondary disasters.

Jiuzhaigou is a popular tourist destination in the mountains on the eastern edge of the Qinghai-Tibet Plateau in southwest China's Sichuan province. A magnitude 7.0 earthquake struck this otherworldly landscape on Tuesday night, injuring at least 431, according to government statistics issued on Thursday. All the known wounded had been treated.

Known for its 108 transparent Alpine lakes, Jiuzhaigou is a big draw for tourists. About 70,000 tourists and migrant workers in Jiuzhaigou had been evacuated, the Sichuan government said.

Some 6,300 villagers in Zhangzha, the epicenter of the earthquake, had been resettled in 17 townships, and their daily necessities such as food and water were ensured.

According to the Sichuan Provincial Department of Commerce, shops in the Jiuzhaigou county seat and the townships in the county are open, ensuring the supply of daily necessities.

The price of grain, meat and eggs is almost the same as before the quake, the department said.

On Thursday, workers were clearing rocks fallen from mountains along National Highway 544, which connects Huanglong Airport with Jiuzhaigou. Two-way transportation is expected to resume in two days.

Meanwhile, disaster relief also was in full swing on Thursday in Jinghe county of the Bortala Mongolian autonomous prefecture in the Xinjiang Uygur autonomous region. A magnitude 6.6 earthquake hit the county on Wednesday morning, injuring 32 and toppling 307 houses, according to official data Thursday.

All the wounded had been sent to hospitals for treatment and 10,500 affected people had been relocated, the local government said.

The central government has allocated 80 million yuan ($12 million) for quake relief in Jinghe, mainly for evacuations and reconstruction of damaged houses. So far, 1,500 tents and 2,040 quilts are being sent to the region.