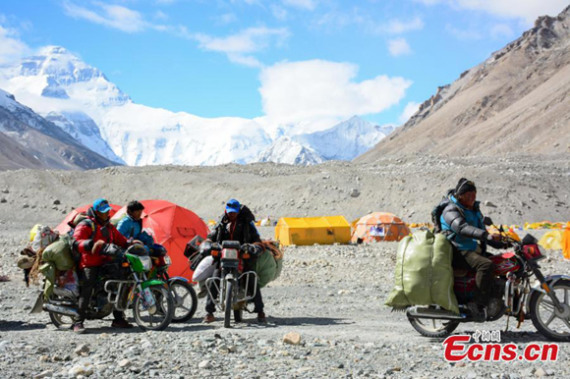 Volunteers transport bags of waste with their motorcycles in a cleaning campaign on the north slope of Mount Qomolangma in Southwest China's Tibet Autonomous Region, May 10, 2017. (Photo: China News Service/Chen Taobin)

With an altitude of over 8,840 meters, Mount Qomolangma is the highest mountain in the world.

Heightened human activities have left unacceptable levels of garbage on the "Roof of the World," said Nyima Cering, deputy director of Tibet Sports Administration. He added that it was the first time the administration had worked with the Tingri county government in Xigaze Prefecture on such a campaign.

The ongoing clean-up, which involved both Chinese and international volunteers, focuses on the campsites at altitudes between 5,200 and 6,500 meters.