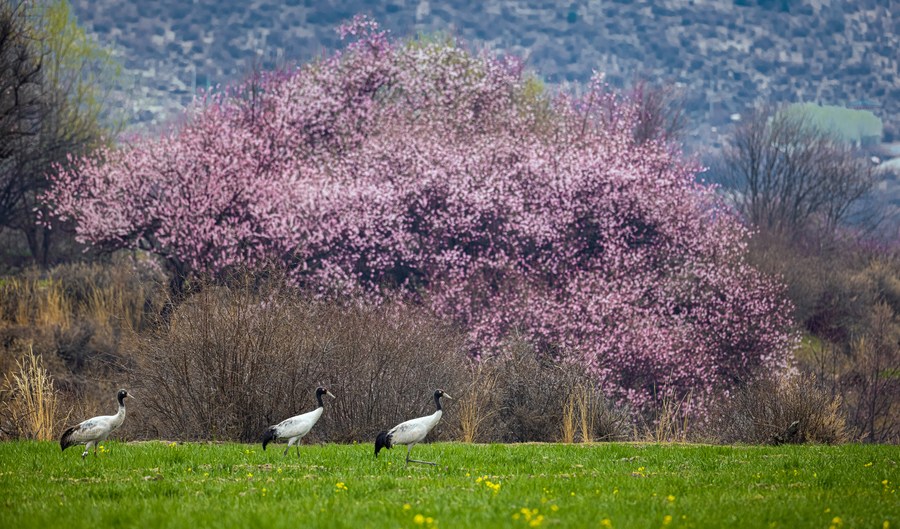 LHASA, Aug. 24 (Xinhua) -- Summer is hot in most parts of China but Nagqu, a city with an average altitude of more than 4,500 meters in southwest China's Tibet Autonomous Region, sees the temperature cool down to as low as three degrees Celsius.

The chilly climate has made a local hot spring a popular destination for many, including Karma Dorje, a Nagqu native who paints Thangka in the regional capital of Lhasa.

"Bathing in the hot water improves blood circulation. The pimples on my face have gone," said the 26-year-old, who comes to the hot spring every three days whenever he returns home.

By utilizing natural and cultural resources, many areas in Tibet have developed rural tourism, bringing tourists as well as additional income to farmers and herders, which helps boost rural vitalization.

With the water temperature around 60 degrees Celsius, the geothermal hot spring in Tonglung Village, Nagqu's Nyainrong County, is one of the highest in altitude in the world.

The village has established a cooperative for the hot spring operation, receiving some 10,000 tourists from the city and nearby counties every year, according to Chophe, head of the village. The cooperative granted 12,000 yuan (about 1,850 U.S. dollars) per household to 75 households of the village last year as a dividend.

A total of 35 villagers, including formerly impoverished ones, work in the cooperative.

"With my job at my doorstep, I can finally take care of my ailing mother at home," said Chimed Wangmo, 20, who used to work in Nagqu City. By working as a cashier and cleaner in the cooperative, she earns 2,500 yuan a month now.

In Tashi Chodan, a community known for Tibetan opera in the city of Shannan, a troupe of more than 30 performers act for tour groups from across the country every day.

Tibetan opera combines talking, singing, acting, dancing, and literature and has a history of over 600 years. It is regarded as a "living fossil" of Tibetan culture and was included in the UNESCO Representative List of the Intangible Cultural Heritage of Humanity in 2009. 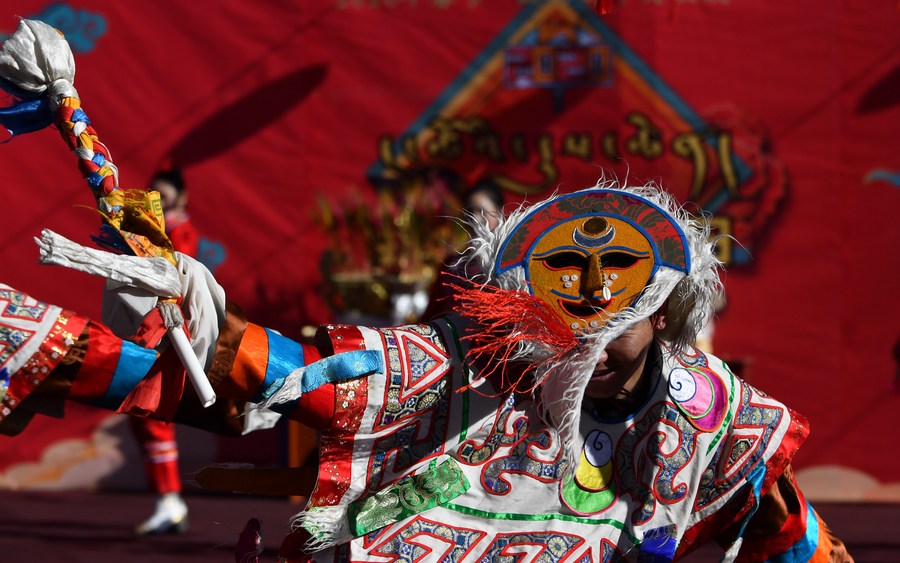 "At the peak season, we have six to seven performances a day. The monthly income can be more than 2,000 yuan for performing alone," said 38-year-old Purbu Kelsang, a local farmer.

To accommodate the tour groups, 58 households of the village are engaged in homestay businesses.

Local villager, Dawa, 63, no longer has to toil at construction sites in cities. With his homestay of eight beds, he earns more than 30,000 yuan a year. He provides buttered tea free of charge and plays flute for his guests which is welcomed by them.

"They like my home a lot. Some of them called when they returned home, promising that they will come every year," he said, adding that his tourists are from provinces like Anhui, Hubei and Hunan.

"The third-party company may be responsible for leasing nearby farmland from villagers, and turn the barley plots into galsang flower fields to attract more tourists," he said.

In Tibet, rural tourism had created, directly or indirectly, 86,000 jobs for local farmers and herdsmen, resulting in an increment in annual per capita income of 4,300 yuan by 2020.

Optimistic about the prospect of tourism, Tonglung Village is expanding the hot spring cooperative, with three more pools being built. The village has planned to make the resort a comprehensive venue that covers tourism, recreation and accommodation to generate more income for villagers.

Nyima Degyi, deputy head of Nyainrong County, said a national highway section passing by the county is under construction.