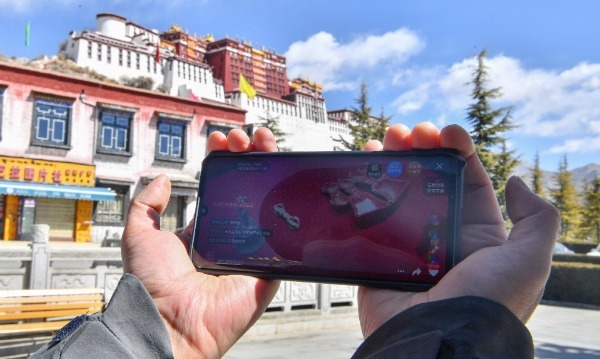 On March 1, the Potala Palace, a landmark in China's Tibet autonomous region, held a livestreaming tour the first time in its over 1,300-year history.[Photo/Xinhua]

More than 310,000 tourists visited the Tibet autonomous region over the Lunar New Year holiday, an increase of 40.6 percent year-on-year, according to the regional department of tourism development.

Nie Jianhua, marketing director of Lansetianguo, a wave machine and hot springs complex in the region's Damshung county, said, "On the first three days of the holiday, the tourists were mainly from places outside the region and the following days there were more locals."

Because of two holidays occurring in proximity to one another, with Losar, or Tibetan New Year, falling on Feb 12－working people in Tibet were given a longer holiday of 10 days.

The resort received an average of 4,500 tourists daily between Feb 17 and Feb 20, and most tourists came with their families, Nie said.

This year, Tibet continues to offer free admission to some of the region's popular tourist attractions to spur the winter tourism season which ends on March 15. The move is part of the region's preferential policies to attract more visitors in the winter.

During the winter tourism period, inbound travelers can also enjoy 50 percent average discounts on airline tickets and some hotels in the region.

Thanks in part to Tibet's tourism initiatives, rural residents are also benefiting from expanded tourism. In Nyingchi, Tibetan guesthouse operator Tsering Dekyi at the popular Draksumtso Lake Scenic Site said that unlike last year, when there were no tourists in the village due to the pandemic, this winter the guesthouse was far busier.

"We stayed open during the New Year holidays and we received tourists almost every day. Sometimes, all the rooms were filled. During the holiday, some tourists also joined our family parties for celebrations, and they received our hospitality and auspicious wishes," she said.

Many tourists from outside the region were also keen to have an authentic traditional Tibetan New Year experience.

"I had been planning for a long time to tour Tibet one day together with my family, and this time I made it happen," a tourist surnamed Feng from Shaanxi province was quoted as saying by Tibet Daily.

"I had the opportunity to experience Tibetan New Year. We were invited to try Tibetan dishes during the holidays, and we really had an enjoyable time."

The region's tourism market has been progressing steadily, said the department.

Despite the impact of the COVID-19 pandemic, the region's tourism industry has maintained good momentum. It received more than 34 million domestic and overseas tourists in 2020, with revenue hitting 35.8 billion yuan, the department added.