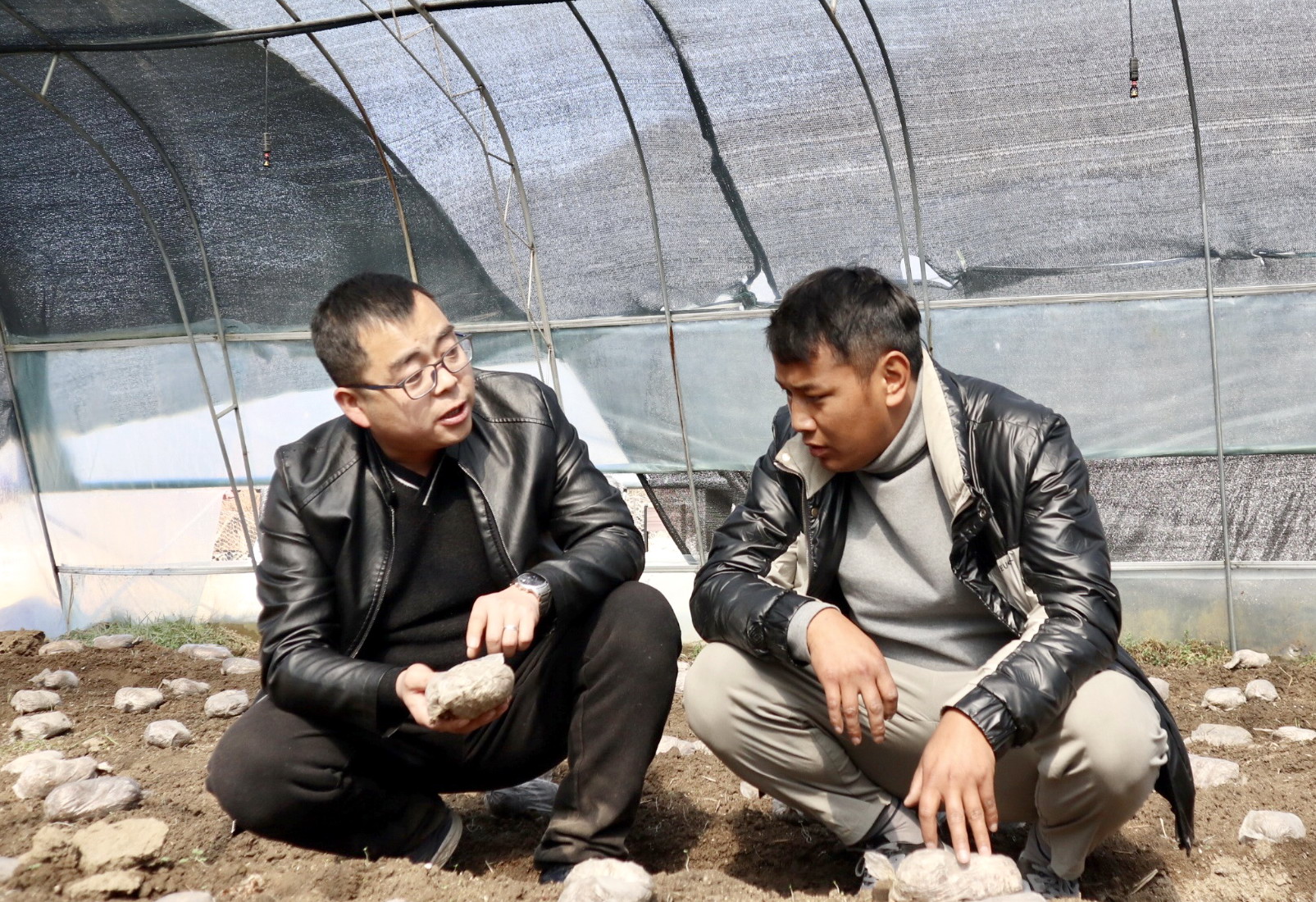 Samtan Dondrub (right) receives advice about mushrooms from technician in one of his greenhouse in Bomi, Tibet autonomous region. PALDEN NYIMA/CHINA DAILY

In a greenhouse covered with black netting on flat land at the foot of Senge Gongla, a snow-capped mountain in the Tibet autonomous region, Samtan Dondrub busily waters his fungus crop with the help of two villagers.

Samtan Dondrub, a college graduate, is one of few in his village in Tramok township, Bomi county, who had the courage to open a new business rather than hope for a stable government job like most others.

"So many college graduates are seeking government jobs today that it's very challenging," he said. "So I gave up taking the tests and decided to start my own business."

As the number of graduates continues to increase thanks to higher school enrollments in the region in recent years, the government has been encouraging them to find jobs in the marketplace or start their own businesses rather than just take civil service exams.

Samtan Dondrub said he had received encouragement and support from the government but "had a tough time convincing my parents, who thought a government job was best".

"The county government also pays a subsidy to college students who open new businesses," he said. "I have sent my application already, and I heard that I can get 50,000 yuan."

In October, Samtan Dondrub planted Morchella esculenta, a medicinal fungi, in the greenhouses, which protect the plants from the harsh sunlight. The mushrooms also grow in the forests around his village, and collecting them in summer is brisk business in his hometown.

Cultivating the fungi by imitating wild conditions can raise yields, and Samtan Dondrub has received technical support from a successful mushroom grower in the county.

Two fellow villagers now work full time in his greenhouses and he also hires temporary workers when there is need. Each worker receives a salary of 150 yuan a day.

Samtan Dondrub expects to earn more than 10,000 yuan in April with his first harvest. A local mushroom company has promised to help him to do the selling. He also plans to invite an internet celebrity to help with promotion.

The human resources and social security bureau of Nyingchi, the city that governs Bomi county, said there were 1,925 college graduates in the area last year seeking jobs, including 440 who found work in the public sector, 870 in the marketplace and 39 who started their own businesses.

During the 13th Five-Year Plan (2016-20) period, the employment rate of college graduates in Tibet hovered around 95 percent, and the rate of market employment and entrepreneurship hit more than 70 percent, Tibet Daily reported.

"At first, my parents were not supportive of my business dream," Samtan Dondrub said. "But with mushrooms sprouting in the greenhouses these days, they are no longer worried or unsupportive. Now they call me to check on my progress, and they remind me to take good care of the crop every day."