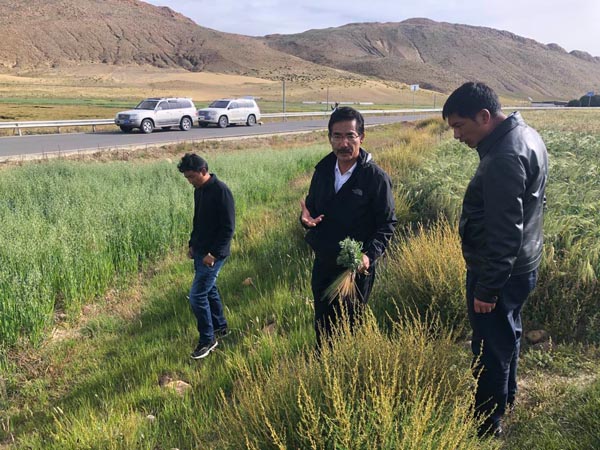 As the harvest was about to be gathered, farmers in the Tibet autonomous region were shocked to receive the news of Nyima Tashi's death on Sept 5.

Nyima Tashi was head of the Tibet Academy of Agriculture and Animal Husbandry. He died at the age of 55 in hospital after a motor vehicle accident on a trip to an agricultural research center in Ngari prefecture.

As Tibet's chief scientist of highland barley crop breeding, Nyima Tashi and his team finalized the selective breeding of more than 20 new barley varieties, some of which have become the major choices in the region.

The variety named "Zangqing 2000" was planted on 50 percent of cultivated land used to plant highland barley in Tibet, achieving an output increased to 5,250 kilograms per hectare.

Around 1 million farmers benefited from the scientific achievement.

Highland barley, known as nai among locals, has been the most important crop and the staple food ingredient in Tibet for thousands of years.

It is traditionally used to make tsampa, or roasted barley flour, or wine.

Because of its rich protein, fiber and vitamin content, low fat and sugar content, highland barley can be used to make a number of healthy food and beverage products.

Born into a rural family in Dranang county, Nyima Tashi remembers never having enough tsampa to eat in his childhood.

"At that time, the barley output of one hectare was only 1,125 kilograms due to the barren land and drought," Nyima Tashi told Xinhua News Agency during an interview last year. "Therefore, growing up as a young boy, I had the wish to make highland barley grow well and produce more in the future."

In 1982, he was admitted to the department of agronomy of Northwest Agriculture and Forestry University in Shaanxi province and became a researcher at the academy after graduation in 1985.

He began to participate in highland barley breeding in 1989.

He made a detailed observation of more than 1,500 different varieties provided by different families in the region.

On the basis of the observation, he made hybrid combinations and then selected and bred some high-quality varieties.

In 1992, he won the opportunity to study highland barley crop breeding for one year at the University of Saskatchewan in Canada. He scored excellent grades. In 1995, he began study at the Institute of Geographic Sciences and Natural Resources Research of the Chinese Academy of Sciences and obtained a doctoral degree in 1999.

Over the past decades, Nyima Tashi has devoted most of his energy to agricultural research.

To select and breed new varieties of better quality, every year he spent five or six months in the experimental field on observing crops, which helped him accumulate abundant materials.

"It is necessary to extend the industrial chain," said Nyima Tashi in the interview. "We will focus our efforts on farming product processing sector using modern technologies."

As of 2019, the academy had developed more than 100 barley-based products and created several famous brands in Tibet.

Nyima Tashi also made outstanding contributions to the international cooperation and talent cultivation of the academy during the past decades.

"With an international perspective, Nyima Tashi paid much attention to talent cultivation of young researchers in our academy," says Sangpo, a researcher at the academy. "Since I came to the academy in 2003, I got several opportunities for further studies at home and abroad, allowing me to improve my knowledge markedly."

"Nyima Tashi's research that is sensible and well-informed directed the focus toward agriculture and food security," Hermann Kreutzmann, professor of geology at the Free University of Berlin, said in his tribute to Nyima Tashi. "Based on empirical evidence, his study on 'making Tibet food secure' was a rich and seminal contribution for our understanding of agricultural resources and food production systems in Tibet."