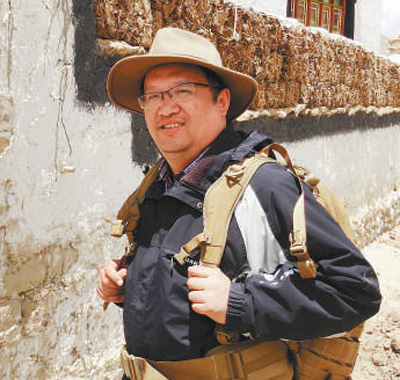 "One gene may save a country, and one seed may benefit tens of thousands of people." Zhong Yang, former dean of Fudan University Graduate School and professor at the School of Life Sciences, has always said this during his lifetime.

It was July 2011 at Mt. Qomolangma No. 1 Base Camp. Just after 2:00 in the afternoon, the wind began to wreak havoc, and people were having difficulty breathing.

"Mr. Zhong, you stay at base camp, we will go!" A student named Lachung saw that his teacher's lips were turning purple and he was panting, so he was worried.

"I know the plants the best, if I don't go, it will be much harder for you to find them!" Going up against the wind, advancing towards the north slope of Mt. Qomolangma, Zhong Yang's lips were purple and his face was swollen. Each step was so difficult… "Found it!" A Saussurea gnaphalodes was found in front. This was the highest-altitude seed plant discovered by human beings and the highest sampling point made by Chinese botanists!

For 16 years, Zhong Yang and his students trudged more than 500,000 kilometers on the Qinghai-Tibet Plateau collecting more than 40 million seeds from thousands of plants. Today, these seeds are being carefully preserved in cold storage and will burst into bloom for people in 80 to 120 years.

In 2016, Zhong Yang applied for Aid Tibet for a third time. He realized that this magical land needed not only a biologist but also an educator.

"I hope God will give me another 10 years, so I will go to Tibet and teach my students." As Zhong Yang explained to his wife, "In 100 years, I definitely won't be here, but the students will still be here. I want to cultivate a group of doctoral students and create a new high-end model of talents training for Aid Tibet."

Under the leadership of Zhong Yang, Tibet University finally had more and more "firsts", which filled gaps in higher education in Tibet and successfully promoted biodiversity research to the world.

On September 25, 2017, Zhong Yang was involved in a car accident in Ordos City, Inner Mongolia on his way to teach in ethnic areas. His life was cut short at 53 years old.

His voice seems to reverberate in people's ears: "Every life has an ending, but I am not afraid. My students will continue on the path of scientific exploration, and the seeds we have collected may sprout one day after a few hundred years. By that time, who knows how many people's dreams will have been realized?"