More than 30 Chinese and foreign experts in areas of artistic painting, Buddhist education, and language studies and also government officials had discussed the topic of “Opening Tibet and Inheritance and Development of Tibetan Culture” on the 2019 China Tibet Development Forum. 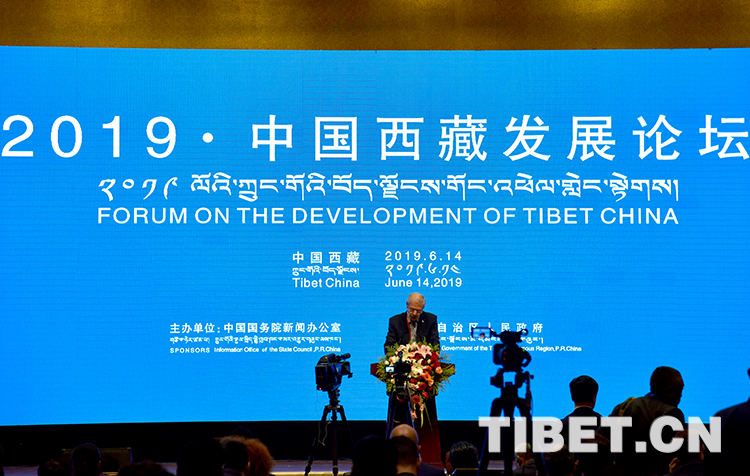 Photo shows a guest speaks at the closing ceremony of the 2019 China Tibet Development Forum.

This was one of three sub-topics of the forum that was discussed before the closing ceremony on June 14. In addition to exchanging views on economic development, artistic intercommunication, educational development, and popularization of ethnic languages, many foreign experts also paid attention to the development of traditional Tibetan culture and religion.

Agita Baltgalve of the University of Latvia is an associate professor of Chinese language and literature. She speaks fluent Tibetan and Chinese. She has visited Tibet and Tibetan-inhabited areas in Sichuan and Qinghai many times. In 2018, she visited several Tibetan monasteries such as Samye Monastery and experienced the scripture-studying atmosphere of monks.

This multi-lingual scholar has translated three Tibetan Buddhist texts into Latvian and had it published. Through translation, she has learned a lot about the history and culture of Tibetan Buddhism.

Baltgalve said that translating Tibetan Buddhist texts, preserving traditional and historical Tibetan Buddhist monasteries and monastic sites are of great significance to the opening-up process of Tibet and its future development.

She specifically pointed out that Tibetan Buddhist classics translated from Sanskrit are accurate and reliable historical materials for studying Buddhist thought, philosophy, and spiritual development. Tibetan Buddhist monasteries have been built since the 7th century and continue to exist to this day. It is thus affirmed that Tibetan Buddhism is one of the most valuable parts of Tibetan culture heritage.

Sim Hyuk Joo is a professor at Hallym University University in South Korea and one of a few scholars in Korea who studies Tibetan culture. Like Baltgalve, he has visited Tibet for research. In addition to studying the Tibetan Buddhist culture of celestial burials, he has also studied Tibetan opera and thangka painting. Next, he will do research on Gesar culture. “It’s a fascinating way of inheriting the teachings of the gods,” he said.

In addition, he mentioned that the Chinese government should promote the digitization of Tibetan Buddhist literature and traditional Tibetan cultural heritage on a macroscopic level to establish a safe and permanent platform for sharing resources.

One guest at the China Tibet Development Forum, Albert Ettinger, is a well-known Tibetan scholar from Luxembourg. He said that in the middle of the 20th century, Tibet still had no modern economy, industry, schools, or hospitals. Most Tibetans did not have access to education, and they knew little about the outside world.

During the 1980s, China’s policy of Reform and Opening-up accelerated the development of Tibet’s modern economy, and traditional culture and the Tibetan language received more attention. Tibet opened up a new field of cultural life. Ettinger said that many historical and cultural heritages have been protected, especially those monasteries with long histories. More and more foreigners are traveling to Tibet for academic exchanges or tourism.