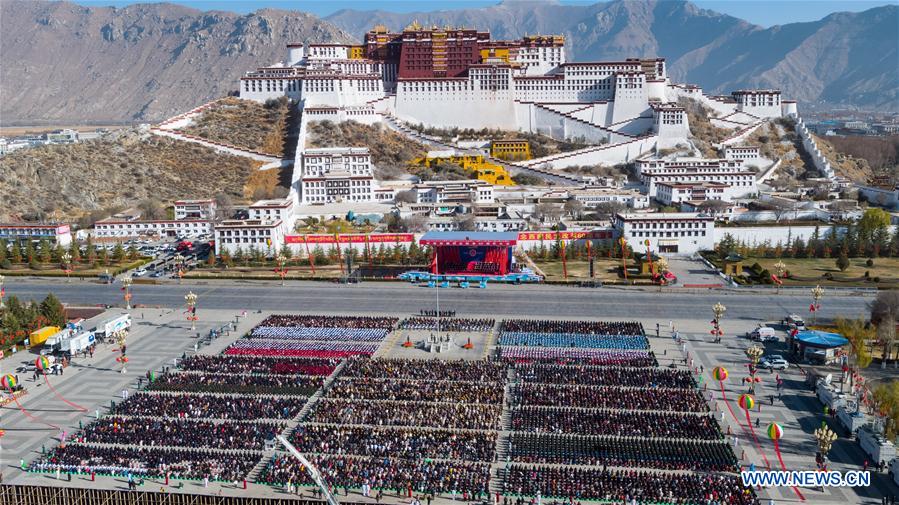 A convention is held to celebrate the 60th anniversary of the campaign of democratic reform in Tibet in the Potala Palace square in Lhasa, capital of southwest China's Tibet Autonomous Region, in this aerial photo taken on March 28, 2019. [Photo/Xinhua]

Representatives from various ethnic groups and walks of life gathered in the Potala Palace square in Lhasa Thursday to celebrate the 60th anniversary of the campaign of democratic reform in Tibet.

At 10 a.m., Losang Jamcan, director of the Standing Committee of the Tibet Autonomous Regional People's Congress, declared the opening of the celebration meeting in both Tibetan and Mandarin, which was followed by a solemn ceremony of raising the national flag and singing the national anthem.

In March 1959, the Chinese central government dissolved the aristocratic local government of Tibet and freed more than 1 million serfs, making them the masters of the nation and society.

Tibet has made historic achievements and undergone tremendous changes since the democratic reform that started 60 years ago, said Wu Yingjie, Communist Party of China (CPC) chief of the region, when addressing the meeting.

The democratic reform completely obliterated the feudal serfdom of theocracy, changed the production relations of the old Tibet, smashed the shackles of feudal spirit and culture and freed local people from feudal political oppression.

Furthermore, Tibet was the first region in China to provide free education for 15 years, and the illiteracy rate among young and middle-aged people has dropped to 0.52 percent.

Medical insurance has covered the whole population in Tibet, and Tibetan people's life expectancy has increased from 35.5 to 68.2 years, Wu said.

Penpa, a villager from Gurum Township in Tohlung Dechen District of Lhasa, attended the meeting as a grassroots representative.

"My mum used to work for a lord. She had no shoes and not enough clothes to wear. Now, we are living in a house of 400 square meters. What a great change," he said.

Penpa used to work in construction sites. Last year, he started to work as an administrator at an express delivery point of JD.com where he earns 4,500 yuan each month. "I feel that we lead a good life," he said.

Jamyang Sherab, an officer of the People's Liberation Army (PLA), said at the meeting, "My family witnessed the democratic reform. As a descendant of the serfs in old Tibet, I became a PLA officer and was elected as a deputy to the National People's Congress and a member of the National Committee of the Chinese People's Political Consultative Conference successively."

In Beijing, a forum was held on Thursday to commemorate the historic event in Tibet's history.

He called for greater efforts to comprehensively implement the CPC's policies for governing Tibet, strengthen the CPC's leadership over Tibet work, strive for the people's well-being, and realize enduring peace and stability and greater development in the region.

Six kilometers to east of the Potala Palace in Lhasa, a memorial hall marking the emancipation of the serfs was opened to the public on Thursday.

The memorial hall, with an exhibition area of 3,500 square meters, displays 165 historical documents, 299 items, 331 pictures and four large settings related to the democratic reform in the region, reflecting the darkness, backwardness and barbarity of the old Tibet, as well as the great changes that have taken place in the socialist new Tibet.

In 2009, the regional legislature established March 28 as a day to commemorate the emancipation of the 1 million serfs, which represented 90 percent of the region's population at that time.

On Thursday, various celebrations were held across Tibet.

In Lhasa, over 1,500 people attended a gala at the Lhasa Public Cultural and Sports Center on Thursday evening to commemorate the democratic reform and the great changes that have taken place in Tibet in the following 60 years.

After watching a drama titled "Tears of Serfs," directed and performed by the villagers, a senior villager Dawa said, "Before the democratic reform, serf owners beat us up at will and did not give us food. What a good life we have now."

"Sixty years ago, the PLA rescued us from the oppression of the serf owners and sent us food and tea," said Chojor, 68. "From then on, we had hope for our lives."

"China is boosting the construction of well-off villages along the country's border. We are building a new house, and we will move into it in September," said Chojor.