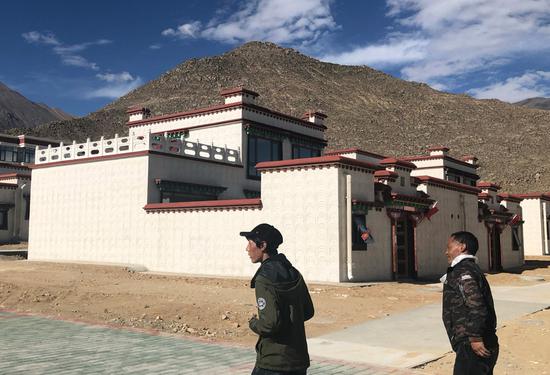 Siyo Tsenga and his son Tagyal head to their new house in a settlement in Doilungdechen district in Lhasa, Tibet autonomous region. (Photo by PALDEN NYIMA/CHINA DAILY)

Siyo Tsenga was pleased to see that his new home was near a medical clinic, after being relocated to a new settlement in Tibet's Doilungdechen district in Lhasa.

Siyo Tsenga is a Tibetan nomad from the region's Nyima county, where the average altitude is nearly 5,000 meters above sea level, making living there a challenge.

Thanks to the region's ecological relocation policy, which started in 2016, his family was one of 262 households from his hometown to move to Doilungdechen, about 1,200 kilometers from Nyima.

"The altitude at my old home is too high to live. It's always winter there. I am very happy to have a second home near Lhasa where the altitude is relatively low. I want to say thanks to the government," he said.

The 52-year-old said he could not walk well because of severe arthritis in his legs, and he hoped the condition would improve in a more comfortable environment.

Although he moved to the new settlement, he didn't worry about his animals because he was able to hire a shepherd to tend them.

Compared with his traditional mud house in the grassland, the well-decorated new concrete house is both snug and pretty, he added.

A total of 708 households were relocated last year, and 2,293 households are scheduled for this year, according to Tibet's forestry department.

The 281 people who moved on Monday are the first from two villages in Nyima county this year, according to Tsering Rigzin, deputy director of Nagchu Animal Husbandry Bureau.

"These two villages needed to be relocated, because both are at a very high altitude, where the environment is harsh and people's life spans are shorter," he said. "Relocating people from high-altitude environments can improve public services, create broader job opportunities and foster better living conditions. Plus, it reduces human activities that harm fragile natural areas."

He said many people suffer from diseases on the plateau, such as high blood pressure and arthritis.

According to Tsering Rigzin, the evacuated nomads will not stop their herding after evacuation, as the younger and more able-bodied are encouraged to maintain the tradition.

"The first group of evacuees are mostly elderly and children from Nyima county. Stronger residents still have to look after their livestock on the grassland," he said.

Those who do not want to continue the traditional lifestyle can find work near the new settlement, including jobs as janitors and drivers. The local government also offered 33 hectares of land for newcomers to plant vegetables or raise livestock.