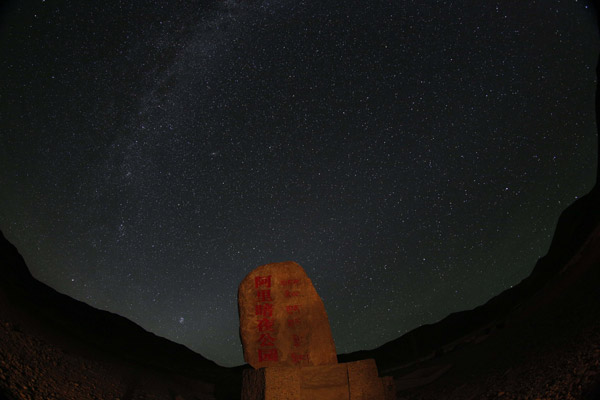 The starry night sky can be seen at the China Conservation Area for Dark and Starry Sky in Ngari in the Tibet autonomous region. (Photo/Xinhua)

Two natural reserves in the Tibet autonomous region have been recognized for their conservation of dark skies.

The China Conservation Area for Dark and Starry Sky in Ngari and Nagchu were accredited by the International Union for Conservation of Nature this month for their efforts in combating light pollution and protecting dark skies, according to their operators.

It is the first time such reserves in China have been recognized by an international organization, according to the China Biodiversity Conservation and Green Development Foundation.

The International Dark-Sky Association, a U.S.-based group devoted to protecting the nighttime environment and dark skies globally, has certified more than 70 such places in the world, but until recently China had no certified conservation areas.

Light pollution has a major effect on nocturnal animals. It also affects humans' circadian rhythms, which are important in determining our sleeping and eating patterns, Ren said.

"The two reserves can also be used for astronomical observations, as light pollution in big cities has resulted in the deterioration of viewing conditions at some older observatories in Beijing and Nanjing," he said. "Many observatories have become educational facilities that promote popular science."

However, the protection of dark skies is still inadequate in China and there is no government institution for regulation and research in the sector, he said

"More efforts are needed to raise people's awareness of the importance of dark skies," he said.

"With its high altitude, little rain and light winds, the conditions for observation are better in Tibet than any other region," Ren said.

The two reserves can also be used to promote tourism development, but the scale should be moderate so they do not hurt the environment, he said.

The foundation is also actively working on building new dark sky reserves in other provinces and regions, including Zhejiang, Shanxi, Jiangsu and Sichuan provinces and the Inner Mongolia autonomous region, he said.