Bumpa Mountain alongside the Lhasa River, silent for nearly half a year, is once again shrouded in melodious music and singing as the fifth season of Princess Wencheng performance officially opened its curtain.

Princess Wencheng, a large-scale epic drama of Tibetan culture which officially opened on August 1, 2013, has completed 622 performances for 1.15 million visitors so far. 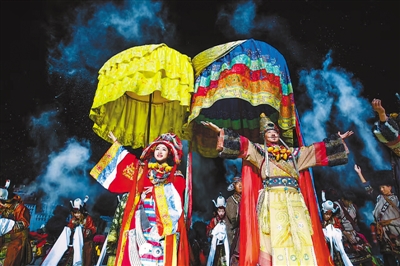 This year, the play made improvements on the original version. The length of performance is shortened, while ensuring that the original story is not affected. At the same time, comprehensive improvements have been made to the lighting, staging, and choreography. The addition of dozens of high-tech special effects lighting, including those that light up Bumpa Mountain and on the head of Sakyamuni Buddha, have added a whole new visual experience.

Bai Ji, artistic director of the play says that this year, more Tibetan elements, such as butter lamps, piles of mani stones, and thangka paintings have been incorporated into the scenes and choreography. In this way, visitors can intuitively experience the classical charm of Tibetan culture.

Denpa, one of the actors says that this is his first Princess Wencheng performance of this year, and he is very excited. The drama is well known and he hopes to perform his role well.

In the year 643 A.D., Princess Wencheng finally arrived in the holy city of Lhasa after three years on road. In the grand and solemn Potala Palace, worshipped by tens of thousands of people, Princess Wencheng and Songtsen Gampo were harmoniously married. The Princess Wenchengstage performance tells the story of this Tibetan-Han marriage, and how the Princess overcame hardships and dangers on her way to Tibet