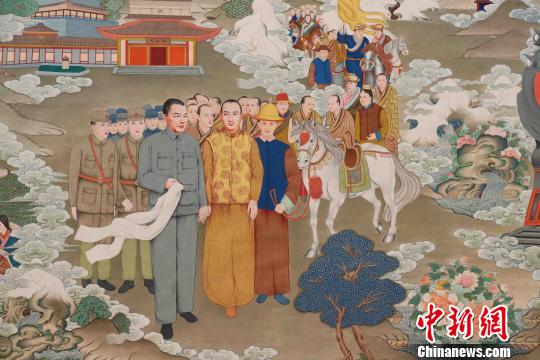 Part of the thangka [Photo/Chinanews.com]

A 56-meter long thangka featuring the 10th Panchen Lama Choskyi Gyaltsen was exhibited at the 2017 Boao Forum for Asia on the afternoon of March 24.

The thangka cost five years of over 60 artisans headed by Sanggye Banlu, a master of crafts and arts. It expresses not only the great achievements and noble spirit of the 10th Panchen Lama, but also the harmonious relationship and love between the 56 ethnic nationalities in China, said Master Yin Shun, vice president of the Chinese Buddhism Association and president of the Hainan Province Buddhism Association, in his speech.

Based on the history of the found of the People’s Republic of China and the peaceful liberation of Tibet, the thangka paints more than 2,500 figures and comprehensively reflects the 10th Panchen Lama’s lifetime effort in safeguarding national solidarity and the unity of China.