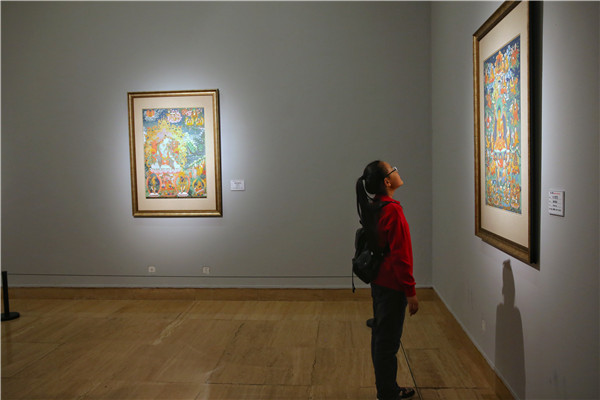 Shortly after the 10th Panchen Lama (1938-89) passed away, Shalu Wangdu, 43, started painting a thangka to remember him. The full-time painter in Lhasa once met Panchen at the Shalu Temple in his native Shigatse.

He painted for around 10 minutes a day. "I picked up my brush only when I felt most comfortable. The glory and happiness were always with me (when I painted)," he says.

It took him 11 years to finish the work that portrays the 10th Panchen Lama in the center and two deities below. And it won him a gold prize at the First China Thangka Art Festival in Lhasa in 2014.

The painting is now on show at a thangka exhibition, Heavenly Tibet, at Beijing's National Art Museum of China, which runs through Jan 18. The display includes dozens of paintings produced in recent years that celebrate contemporary artists' efforts to enliven the thangka tradition.

Viewed as an encyclopedia of Tibetan culture, the genre depicts religious subjects, such as Buddhist deities and lamas, and also non-religious themes like history, legends and medical knowledge. They are either painted on cotton or embroidered on silk.

The ongoing exhibition largely features Buddhist thangka. Some are framed using glass and others are mounted on a textile backing, a traditional method so that nomadic Tibetans can roll up the paintings and travel with them.

Thangka is also called a moving shrine to revere Buddhas.

The displayed paintings showcase the characteristics of major thangka schools. And they reveal new developments where painters blend in personal aesthetics, according to Lhapa Tsering, curator from the Tibet Painting Academy in Lhasa.

In Green Tara Goddess by Shalu Wangdu, the central deity is not placed in an elaborate composition featuring many small Buddhist figures and patterns, and a clear division between heaven and Earth. 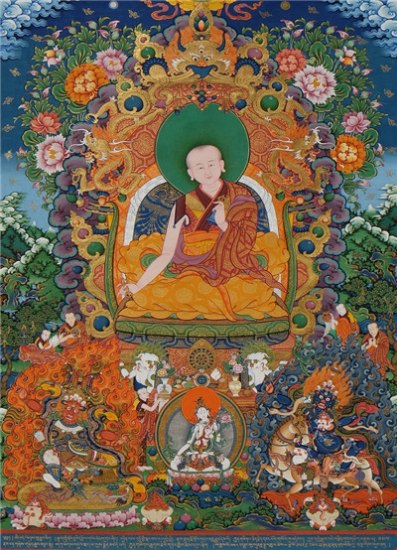 "The painting, however, looks no less brilliant than others that were painted in the traditional style," says Lhapa Tsering.

The exhibition highlights China's efforts to preserve thangka art over the decades.

Thangka was included on the national list of intangible cultural heritage in 2006.

Separately, Regong art, a collective of plastic arts including thangka that is practiced in Qinghai province's Tibetan villages, was added to UNESCO's Representative List of Intangible Cultural Heritage of Humanity in 2009.

As of now, China has six State-level thangka inheritors. Three are from the Tibet autonomous region and the others are from Tibetan areas in Sichuan and Gansu provinces.

Among them, Ngawang Jigme, a professor of Tibet University, is the only State-designated inheritor who follows the traditional techniques that use Tibetan mineral and plant pigments.

Tibet University started thangka courses in 1985 and now grants bachelor's, master's and doctoral degrees. It has helped to modernize thangka, which for centuries was passed down only to family members and apprentices. Also, it allows girls to study and practice the age-old tradition that was earlier the exclusive preserve of boys.

Lhasa has hosted an annual Thangka Art Expo since 2011. There, experts also discuss how to improve and build a healthy market for thangka.

At the expo, master painters and scholars also critique works by thangka painters and decide whether to upgrade their ratings. 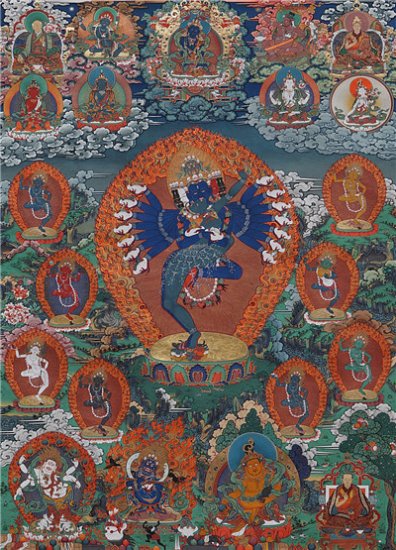 Konchog Je, a first-grade painter at Lhasa's Tibet Thangka Academy, says that the latest expo, held from Dec 23 to 25, saw artists from different schools team up to improve thangka technically and artistically.

Tibet's official figures show that, as of the end of 2016, the region has honored four "lifetime thangka masters" and 99 "graded painters" who fall into three ranks.

Also, the number of non-governmental thangka institutes, including fine art academies, training centers and painters' studios, in the area has reached almost 300. They produce some 200 painters every year.

A booming economy and improving living standards have also made thangka sought after.

An imperial thangka embroidered on silk in the Ming Dynasty (1368-1644) sold for $45 million at a Hong Kong auction in 2014. It shows a wrathful Raktayamari in brilliant red with patterns woven with gold thread, testimony to the exquisite techniques in vogue during the reign of emperor Zhu Di.

Shalu Wangdu says the thriving market for thangka has also raised the painters' social status and incomes even though some sell inferior works for quick profits.

To check this problem, last year, Tibet's cultural administration put into effect a classification system for thangka, which defines the art and specific categories it is divided into.

The system marks the first step for Tibet to build up a regulatory framework for painted and embroidered thangka pieces, as well as for the manufacture of pigments and painting tools.

Ngawang Jigme says painters and craftsmen in the past devoted themselves to thangka more out of love and responsibility. Hopefully now, with the implementation of the laws, the tradition will be safeguarded.

Shalu Wangdu says while intelligence and practice make a good painter, it is moral integrity that identifies a real master.