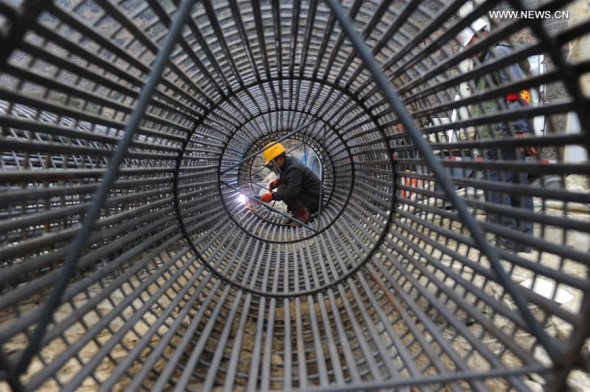 The whole project will cost about 216 billion yuan, while the train will travel at 200 km/h

The most difficult part of the Sichuan-Tibet railway, the Kangding-Nyingchi section, will begin construction in 2018, according to the National Development and Reform Commission.

As the second railway connecting Tibet with the rest of the country, the project is expected to be completed in 2025, five years earlier than planned.

The 1,838-km track starts in Chengdu, Sichuan province, the lowlands of China's southwestern region, and will pass through Sichuan province's Ya'an and Kangding, and Tibet's Nyingchi and Lhasa.

A route map of the Sichuan-Tibet railway

Construction of the east and west sections began in 2014 and 2015 respectively.

The whole project will cost about 216 billion yuan ($32 billion). The highest speed the train will reach will be 200 km/h.

Sun Yongfu, an academician of the Chinese Academy of Engineering, said that the new line will travel through the most complicated geographical area in the world.

"It will cross many fault zones," Sun said, adding that geological difficulties, including landslides, earthquakes and avalanches, will be overcome in the project.

Perched at more than 3,000 meters above sea level, and with more than 74 percent of its length running on bridges or in tunnels, the railway will meander through the mountains, the highest of which is over 7,000 meters.

The southeast is the most populous region in Tibet, and the west of Sichuan is the least developed region of the province. The two regions are filled with breathtaking natural views and fascinating ethnic cultures.

"The railway will effectively boost tourism, bring a new Shangri-La to the world and tangible revenue to local people," said He Ping, a tourism agency manager in Chengdu.