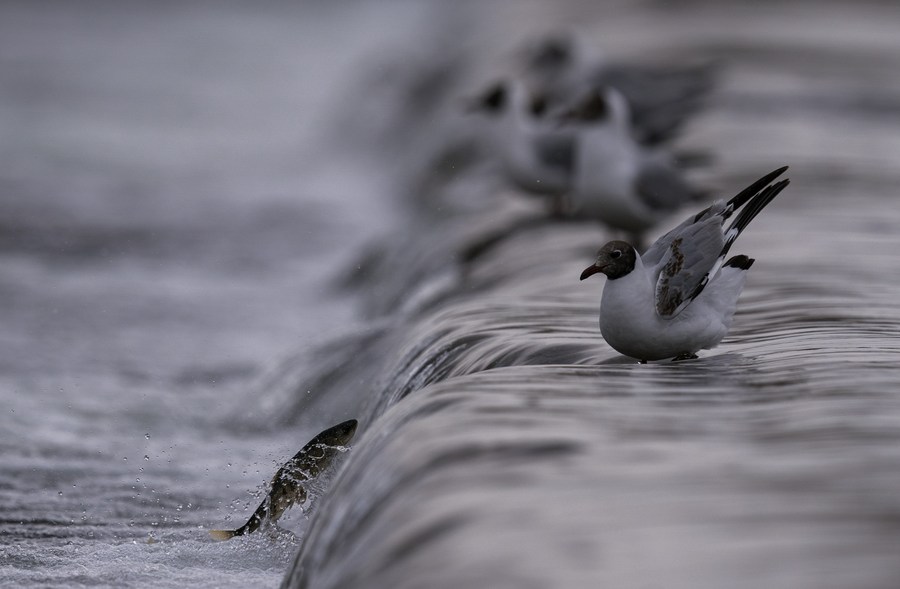 XINING, June 9 (Xinhua) -- Over the past weeks, thousands of naked carp were spotted migrating upstream in the three rivers that flow into Qinghai Lake, China's largest inland saltwater lake.

"From late May to early June, we witnessed the rare scene of naked carp migration in the rivers, all of which are main breeding sites of the species," said Yang Jianxin, deputy director of a center dedicated to protecting the naked carp in the Qinghai Lake, located in northwest China's Qinghai Province.

The carp species, known as "Huangyu" in China, is endemic to the Qinghai Lake. The fish is not only critical to the existence of local bird species, but also significant to the ecological balance of the highland lake.

Owing to overfishing and environmental deterioration, the population of naked carp declined sharply in the 1960s and 1970s. In 2002, Qinghai Lake only had 2,592 tonnes of naked carp.

In order to protect the species and restore the environment, authorities in Qinghai banned naked carp fishing in the Qinghai Lake and in nearby rivers in 2003. 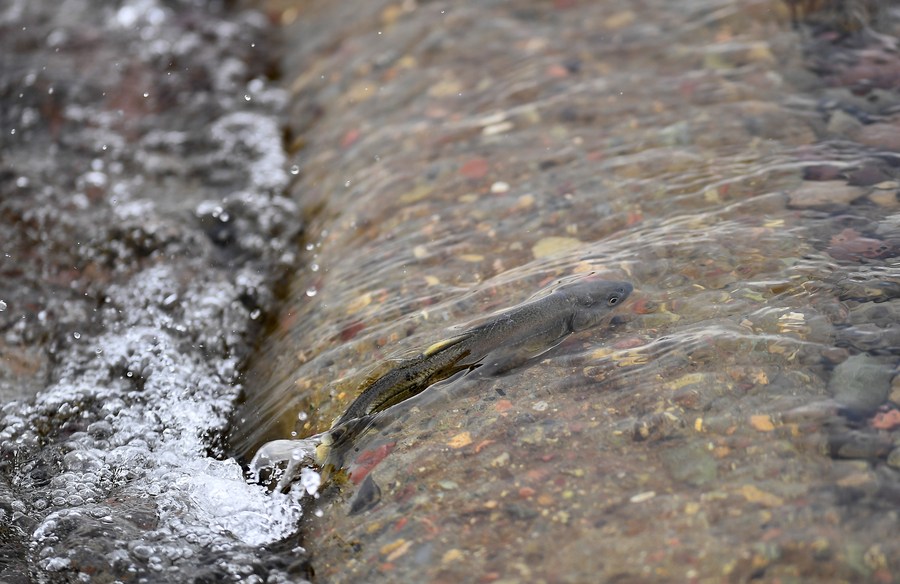 Located in the northeastern part of the Qinghai-Tibet Plateau, the Qinghai Lake is key to maintaining the ecological balance in western China. It is also a natural barrier for controlling the eastward spread of desertification and ensuring the safety of agricultural areas in eastern China.

In recent years, the Chinese government has implemented various ecological projects in the Qinghai Lake Basin, and achieved remarkable results in restoring the environment, said Gao Jingyu, deputy director of the protection and utilization administration in the Qinghai Lake scenic area.

In 2008, Qinghai adopted a plan aimed at ecological environment protection and comprehensive management of the Qinghai Lake Basin with a total investment of 1.57 billion yuan (about 245 million U.S. dollars).

A total of 800 hectares of wetland had been restored by 2018, thanks to measures such as a grazing ban or delay and rotational grazing on more than 31,000 hectares of land.

In 2020, the water level of the Qinghai Lake reached 3,196.62 meters and its water body covered an area of 4,588.81 square km. Both figures have soared for 15 consecutive years. Since 2016, a total of more than 33,333 hectares of desertified land have been treated in the surrounding areas of the lake.

The improving ecosystem of the lake has also benefited migratory birds and Przewalski's gazelles, an endangered antelope species named after Russian explorer Nikolai Przhevalsky who found a specimen and brought it back to St. Petersburg in 1875.

The lake has become a key wintering habitat for more and more migratory birds, with over 300,000 birds making a stop here during migration every year, according to He Yubang, head of the Qinghai Lake national nature reserve administration.

As the only habitat of Przewalski's gazelles, the areas surrounding the Qinghai Lake had seen the total number of the species increase from 257 in 2004 to over 2,700 in 2020.

"In a month, 30 cubs of Przewalski's gazelle are expected to be born, bringing the population of gazelle cubs in our station to 90," said Wu Yonglin, head of an environmental protection station located on the south bank of the Qinghai Lake.

"Seeing the increasing population of Przewalski's gazelle makes all our hard work worth it," Wu added.

At present, Qinghai is accelerating its efforts to construct a national park around the Qinghai Lake. The master plan for the park was approved by experts in May.

"With the building of a national park, more vigorous protection measures will be adopted for the Qinghai Lake," said Liu Qingchun, an official with the protection and utilization administration in the Qinghai Lake scenic area. "We all hope for the lasting beauty of the lake and more benefit for the people on the plateau."