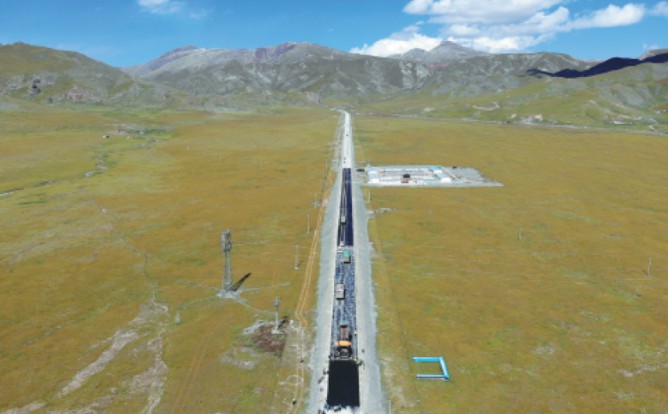 Gansu, Qinghai will benefit from smooth flow of goods, services and manpower

Asia's highest tunnel, located in Northwest China's Qilian Mountains, was fully connected on Tuesday, breaking the transport bottleneck between landlocked Gansu and Qinghai provinces and boosting the flow of goods and services in the region.

The Dongshan Tunnel, part of the Sunan-Qilian section within the G213 national highway, is dubbed a key project of the Belt and Road Initiative.

It is expected to immensely enhance traffic flow between Sunan Yugu autonomous county in Gansu and Qilian county in Qinghai.

The 3,639-meter-long tunnel, built by the First Engineering Co Ltd of China Tiesiju Civil Engineering Group (CTCE) since June 2018, has an elevation of 4,200 meters.

The Sunan-Qilian Highway, starting at Baizhuangzi in Sunan and ending at S215 provincial highway in Qinghai, entailed a total investment of 1.4 billion yuan ($215 million).

It will save travelers between Sunan and Qilian more than 400 kilometers on the road and cut travel time by some five hours, said Ma.

The Qilian Mountains, stretching for over 1,000 kilometers to the south of the Hexi Corridor, the main artery on the ancient Silk Road, have an average elevation of 4,500 meters, with high ridges piercing the skies.

Ma said CTCE built the No 5 bid, which is 15.01 km long, of the Sunan-Qilian Highway, covering roadbeds, bridges and culverts. The Dongshan, or East Mountain, tunnel was the most difficult project for the highway. First Engineering's bid entailed an investment of 496 million yuan.

Since first entering the region in March 2018 for preparation, CTCE started digging the tunnel in June 2018, intending to make it a transport artery in China's northwestern region, Ma said.

Sunan, home to the Yugu ethnic group, comes under the administrative purview of Zhangye city, which was once called Ganzhou prefecture. It was one of the biggest international trading hubs on the ancient Silk Road.

Ma said as the average annual temperature covering the tunnel is-10 C, the frozen soil there is half a meter deep on average. The full completion of the project once again showed CTCE's enterprise spirit of endeavoring to overcome difficulties with hard work, and to dare to compete and never rest content.

The Dongshan Tunnel, a landmark project in China's northwest, is the first plateau tunnel for builders of 70-year-old CTCE, said Chen Taiheng, Party secretary of the project department.

Chen said when they first entered the work site, they had no running water, no electricity and no mobile communication for almost four months due to the high elevation, which also brought headaches, dizziness, nausea, vomiting and tinnitus to newcomers.

To ensure the health of builders, he said, CTCE hired a local doctor to conduct regular check-ups, treating them for any adverse reactions in a timely way.

Wang Yongtao, 32, a native of Fugou county in Henan province, conducts checks on building materials and equipment. He said within half a month of joining the project in June 2018, he overcame discomfort such as chest tightness and headaches, and became very satisfied with the work, the more so because of the realization that he is able to contribute to an important project.

Chen said he was pleased all the diligent and dedicated work finally bore fruit in what might appear as a no man's land. Besides 60-odd managerial staff, around 300 workers worked tirelessly to make the project a reality.

In addition to daily necessities, heating equipment and various cold-proof materials were provided by CTCE to the builders on site, creating a warm home for them in the harsh environment, Chen said.

Since the region is home to wildlife like marmots, wolves, wild sheep and hawks, each dormitory was equipped with an attached washroom for employee safety.

Zhao Changping, a 45-year-old native of Yunyang county in Chongqing, said as a CTCE employee, he earns a monthly salary of 12,000 yuan, which helps supports his wife and three kids aged 17, 10 and 8 back home.

When a tanker arrives at the work site, it enters the heating room for further heating to ensure the concrete's temperature is just right for use.

The main entrance and exit of the project, only four meters wide, were narrow and rugged, posing much difficulty in transporting building materials to the perpetually snow-covered mountain.

Pan Jihong, Party secretary of CTCE First Engineering, said his staff members are proud of taking part in building the tunnel. The project has also helped CTCE deepen its experience of applying its technology in the construction in plateau areas.

It has also helped lay a solid foundation for the full opening of the Sunan-Qilian highway to the public in June this year.

Bai Yong, magistrate of Sunan, thanked the CTCE builders, who in spite of the harsh geological conditions, successfully completed the tunnel construction in a timely manner.

It will undoubtedly help elevate the local social and economic progress, Bai said.

Zhou Mingjie contributed to this story.