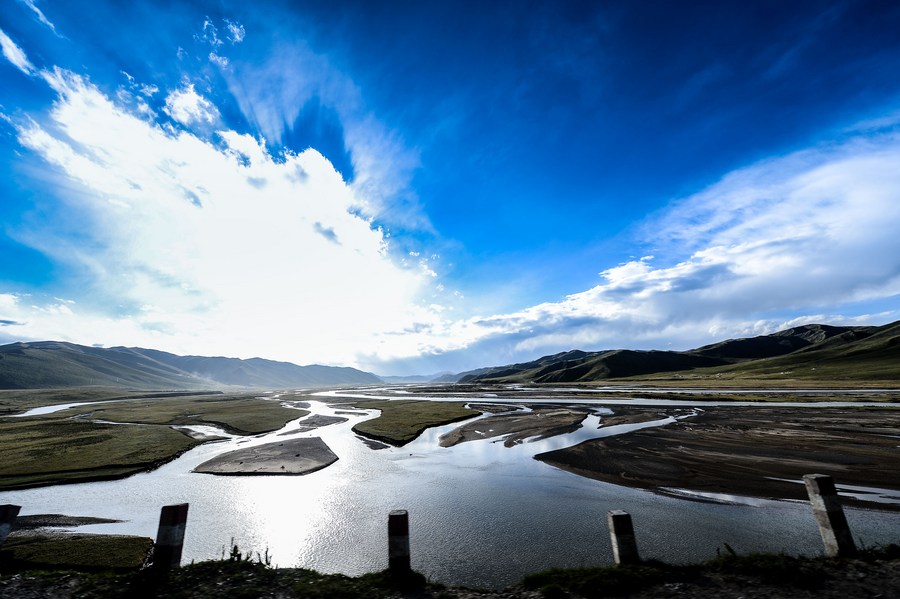 XINING, Oct. 23 (Xinhua) -- Chinese scientists have kicked off a new glacier research at the headwater region of the country's Yellow River, in the northwestern province of Qinghai.

The program is part of China's second comprehensive scientific expedition to the Qinghai-Tibet Plateau and the first time to carry out glacier research at the headwater regions of the Yellow and Lancang rivers, said Xu Baiqing, who heads the research team.

The team of more than 50 will carry out research on glaciers in the aforementioned areas for more than 40 days.

They have set up a base camp near the main peak of Mount Anyemaqen, which is 6,282 meters above sea level in Golog Tibetan Autonomous Prefecture, Qinghai Province. The first group of researchers reached the main peak by helicopter.

The Qinghai-Tibet Plateau, also known as the roof of the world, is the source of multiple major rivers in Asia. The comprehensive scientific research focusing on glaciers at Sanjiangyuan, or the sources of three rivers, namely the Yangtze River, Yellow River, and Lancang (Mekong) River, was launched on Monday.

The Institute of Tibetan Plateau Research under the Chinese Academy of Sciences (CAS) led the research in partnership with the Shenyang Institute of Automation of CAS, the Polar Research Institute of China, and several other institutions in China.

"The study aims to gain a better understanding of the mechanisms of climate and environmental changes as well as the impact of glacier changes on the hydrological resources in the hinterland of the Qinghai-Tibet Plateau," said Xu, the team leader.

The team will use the high technology means, including drones, robots, and the BeiDou positioning, to assist in the observation of glacier landform features, airborne radar measurement, personnel and material transport, and ice core drilling.

The research results would also provide data and theoretical support to the construction of the Sanjiangyuan National Park, which will be China's first National Park upon completion.

China launched the second comprehensive scientific expedition to the Qinghai-Tibet Plateau in June 2017, 40 years after the first expedition. Lasting five to ten years, the expedition members will conduct a series of studies focusing on the Plateau's glaciers, biodiversity, and ecological changes, and they will also monitor changes in the region's climate.