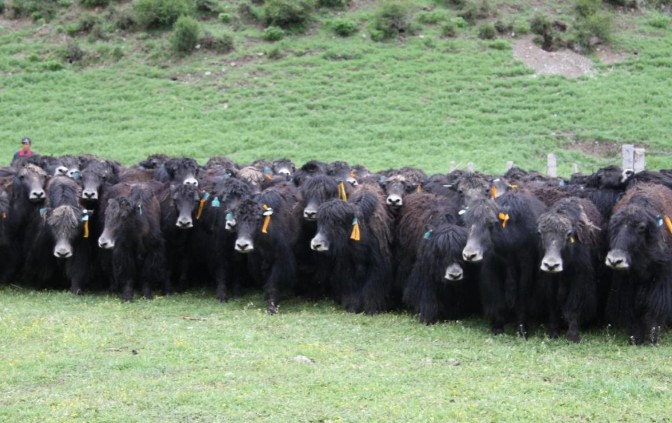 For decades, Lhakar, a Tibetan village on the Qinghai-Tibet Plateau, was plagued by poverty. Because of the relatively small pastures available to villagers, their efforts to increase herds to boost incomes were not only fruitless, but also caused serious damage to the environment.

However, many families in the village in Tsekhok county, Qinghai province, which sits at an altitude of 3,500 meters, have seen their incomes triple in recent years.

The changes began after the village started a collective that has improved the efficiency of livestock herding and also freed up many of the villagers to do other work.

Jakdo's family of six owns about 70 hectares of pasture.

However, the family only made about 20,000 yuan a year from herding 40 yaks and 40 sheep before it joined the collective.

Though the 48-year-old thought about pursuing other work, he gave up the idea because his wife could not manage the animals on her own and also take care of their children.

"The amount of grass in our pasture was small and some parts of it were severely damaged, but I was shackled to the job," said Jakdo, who goes by one name.

In 2012, Jakdo joined the herding cooperative, which was established by a village committee a year earlier.

Villagers who join the cooperative hand over their livestock and pastures to the cooperative for management. At the end of the year, they are eligible for dividends according to the size of their pastures and the number of their animals, Jakdo said.

The collective generates income through the sale of meat and milk products. It also takes care of pest control in the pastures and purchases yaks of a better breed with funds left over after the dividends are paid.

Jakdo said his family can earn a yearly dividend of up to 50,000 yuan ($7,360) from the cooperative. He is paid additional annual income of about 20,000 yuan for his job as a deputy secretary of the cooperative. His wife earns 6,000 yuan a year milking cows for the collective.

According to the village committee, thanks to the cooperative, 236 herders out of a population of almost 900 were freed up to do other work or set up businesses.

Kaldo, who also joined the cooperative in 2012, started a transportation business after buying a small truck. The 44-year-old now makes over 50,000 yuan a year from the business. His wife also works for the cooperative milking cows.

With his increased income, Kaldo bought a car last year. "I never expected I could own a car," he said.

In 2010, per capita annual income in the village was 3,449 yuan, according to the village committee. The amount increased more than fourfold to 15,330 yuan by the end of 2018, when all villagers were removed from the national list of poverty-stricken people.

The collective paid 23.7 million yuan in dividends to villagers from 2012 to last year.

While greatly increasing villagers' incomes, the cooperative has also contributed to improvements in the environment, said Jakbum Gyal, deputy head of Tsekhok's bureau of agricultural and animal husbandry.

He said villagers need to reach a balance between the number of their animals and the size of their pastures if they want to join the collective.

For example, collective members are only allowed to have one yak for every hectare of pasture.

Traditionally, yaks graze on pastures throughout the year. Under the cooperative's management system, they are kept in pens for half of the year to protect the pasture, Jakbum Gyal said.

The collective model has been widely promoted in Tsekhok after it proved effective in increasing people's income and protecting the environment.

It has been adopted in 37 of the 64 villages in the county, with another 18 preparing to implement the system, Jakbum Gyal said.

In 2018, all villagers in Lhakar moved into new houses as the local government took steps to build a moderately prosperous society in all respects by the end of this year.

Kaldo said that before moving to their new home, his children had to travel 30 kilometers every day to go to school. "Now the schools are just near our homes. There are also restaurants and hospitals nearby," he said.