A Yushu earthquake survivor's life story of finding hope through wheelchair basketball after losing the use of his legs in a car accident.

XINING, Northwest China, April 13 (Xinhua) -- When life gives you lemons, make lemonade. There is no more an apt phrase for Punco Wangyal, a Yushu earthquake survivor who one year later was hit by a car and lost the use of his legs, but found hope through wheelchair basketball.

Nobody thought Punco could have bounced back from the injury, turn over a new leaf of his life on his wheelchair, and inspire people in his position. But over time, the 31-year-old from Yushu, Tibetan Autonomous Prefecture of China's Qinghai Province, found his strength and made himself a lemonade, bitter yet sweet.

"I survived the earthquake, but never had I ever thought that my life would go upside down a year later because of a car accident," said Punco.

In March 2011, about a year after the magnitude-7.1 earthquake that struck Yushu, Punco was struck by a car that led to a serious spinal cord injury. He would never walk again.

The young Tibetan was devasted.

But he finally chose to swallow his pain and stop grieving, because he knew deep down giving in and losing hope would only lead to suffering. After a serious internal struggle, Punco decided to fight back, no matter how hard it would be.

So the battle began, starting with lessons to do the simplest daily tasks. Even though the progress sometimes seemed like baby steps, Punco never gave up. His determination and will soon charmed people around him.

With the help of his therapists, he learnt from the scratch how to dress, get up from his bed, even make his way to the bathroom on his own.

Punco Wangyal sits next to a wall with portrait pictures of the group members at the mutual-help group Yushu Spinal Cord Injury Organization, April 2, 2020. (Xinhua/Zhang Long)

While he was struggling with his recovery, Punco knew he would soon face a bigger problem, how would he resume his past life? Before the tragedy, he was a tour guide, with an immense passion for new languages and a dream of exploring every corner of the world.

"I have interests in computer and media. Reading opens up my heart and keeps me away from negativity," he said. After serious consideration, he made the decision to go back to school. In 2012, over a year after his injury, he got into a vocational school in Chengdu, in the nearby Sichuan province.

Campus life was a stage and Punco became the superstar. To put it in his words, "the stage is as big as your heart". He was the model student who never missed a class, the lead singer of the band, and the champion of the school's English speech contest.

As his new life came together, his heart still longed for the world out there. After graduation, he went to Germany for further studies. Since then, he has never stopped traveling. In two years, he left his footprints in ten countries on three continents. He even opened an Indian restaurant in Chengdu after finally returning and settling down. 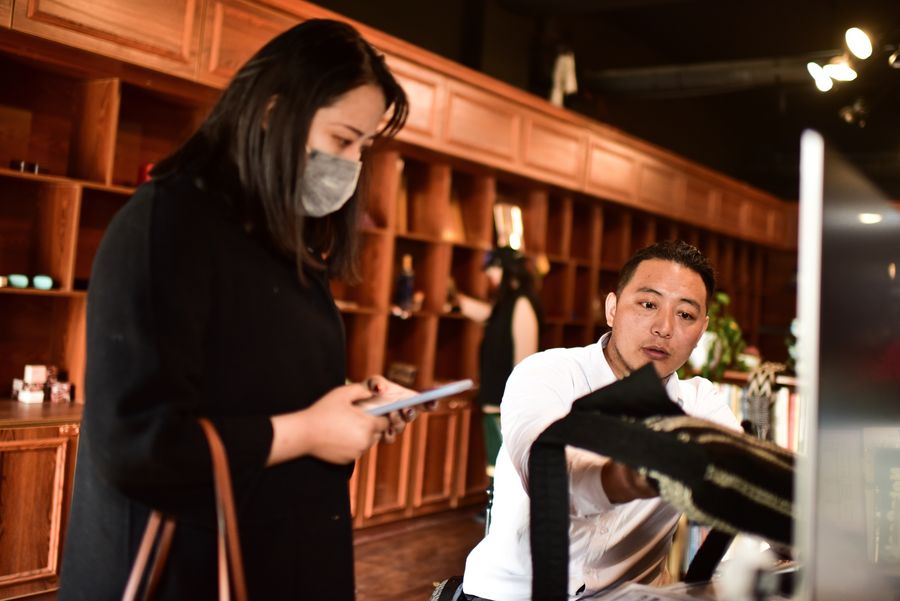 Punco Wangyal checks out for a customer at the coffee shop of the mutual-help group Yushu Spinal Cord Injury Organization, April 2, 2020. (Xinhua/Wu Gang)

Punco knows more about physical and mental pain than just about anyone else and knows the best way to battle those pains.

He thus conceived the idea to be the inspiration for those who also suffer from his condition, especially borne from the catastrophic earthquake that struck his hometown ten years ago.

In 2018, Punco founded the Yushu Spinal Cord Injury Organization, a home for people with the injury where they can get together to get vocational training such as crafting, baking or coffee making.

But the most surprising thing about the organization is its basketball team. Even now in his wheelchair, Punco still can't let go of his childhood dream of playing basketball. "When I was a little boy, I dreamed about play basketball, kicking footballs freely on my hometown grassland."

For Punco, the sport is not only about physical exercise, it also means companionship and personal triumph over hardship. That's why he formed the basketball team for those who share the same passion and look for companionship to gain strength.

"That's the power of sport," Punco pointed out.

Baizhou is one of many examples. He lost his ability to walk after a car accident in 2007 and had a hard time getting back on track. But ever since joining the team, he found the strength to regain hope. "I was in a lot of pain every single day. But with the help of my teammates, I was finally able to walk out the darkest moment of my life." he said.

In November 2019, the team traveled to Lhasa to compete with the local team made up of people with the same affliction. "It was more about seeking encouragement and having fun than winning," Punco said.

"I'm 6 feet tall and I'm only about 4.5 feet on my wheelchair. But when I play basketball, my teammates and I become each other's rocks, and that's the power of sport," he exclaimed.