Cheng holds a banner "I want to become an airborne trooper when I grow up" as airborne troops leave after their rescue work in the 2008 Wenchuan earthquake. (Photo/81.cn)

"Beep...beep" comes the sound from the green light as the hatch opens. Cheng Qiang takes a deep breath and jumps out of the jet.

Three seconds later, the parachute opens, he adjusts himself and lands safely. After quickly folding his parachute, Cheng tightens his grip around his automatic rifle and plunges himself into the jungle.

This was a scene from a recent training Cheng attended as a paratrooper.

Ten year ago, Cheng was a 12-year-old boy who held a sign saying "I want to become an airborne trooper when I grow up" when he saw airborne troops leave after their rescue work in the 2008 Wenchuan earthquake. Now Cheng has become a soldier of the Chinese airborne troops, just as he said he would.

Recalling the day the quake happened, Cheng had a lucky escape as he had skipped school and gone swimming in a pond in Shifang, 40 kilometers away from the epicenter Wenchuan. But the quake destroyed his home and took away the lives of his little niece and his classmates.

"We survived but fell into despair, not knowing what to do. It felt like the whole world had stopped running," he said. Then on the second day of the quake came the moment he will never forget - a large number of airborne troops appeared in his hometown, carrying rescue supplies.

"It was really cool to see them descending from the sky. Their bravery sowed a seed in my heart of becoming an airborne trooper," Cheng said. It was the first time he had a dream.

Cheng also noticed the words "airborne" on their helmets and "the troop unit Huang Jiguang was once at" written on the flag they were carrying.

Huang Jiguang is a Chinese war hero who sacrificed himself in the battle of Shangganling during the War to Resist US Aggression and Aid Korea in 1952. In the battle, he blocked enemy fire with his chest to run down the enemy's ammunition and seize a strategically important place. 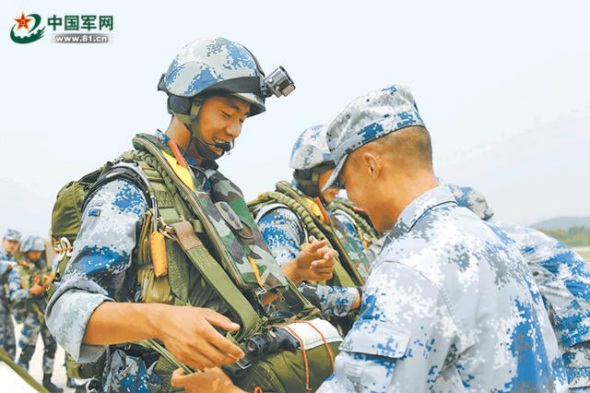 Now Cheng has become a soldier of the Chinese airborne troops. (Photo/81.cn)

"Huang and I both come from Deyang, Sichuan province. The airborne troops are just like my family," Cheng said. "So I made up my mind to become one of them who could bring people strength and hope," he said.

In 2013, Cheng signed up for military service in airborne division. He and other fellow soldiers were told anyone who got excellent performances in the training would be able to become a member of Huang Jiguang heroic squad.

"I wanted to know more about Huang Jiguang, I wanted to know if I could be a hero like him," Cheng said. During his life in the army, he learnt that at least 38 soldiers blocked the enemy fire in the battles following Huang's heroic deed.

"There was not just Huang Jiguang, there were so many heroes like Huang who preferred honor to life," Cheng said. So he trained himself hard as he believed it's a way to show respect to the martyrs and it is also a return to the rescuers who helped him in the quake.

The intense training brought Cheng pride and honor, but also sometimes the pressure. Cheng still remember his first parachute training experience when he was chosen to be the first one to perform parachute jump shortly after he was recruited in the army.

"It was like in a dream. I just couldn't stop my whole body shivering" Cheng said. "At that very moment, I told myself only if I conquer the fear can I get the chance to become a soldier of Huang Jiguang heroic squad," he said.

Another time, Cheng and six other fellow soldiers were in Qinghai-Tibet Plateau for a competition which included extreme challenges. He had trouble in breathing and felt a burning pain in his chest after long distance hiking. When he was 600 meters from the finish line, Cheng felt he would fell down at any time. He kept reading Huang's name to encourage himself and finally won the championship.