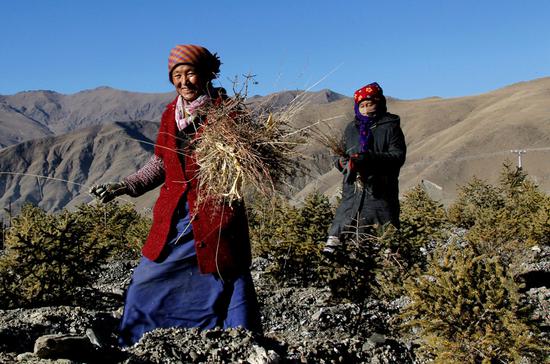 The environmental quality and living conditions on the Qinghai-Tibet Plateau have steadily improved thanks to government efforts, and local residents have been the economic beneficiaries due to the advent of green industry and ecological compensation policies, a white paper issued on Wednesday said.

The white paper, published by the State Council Information Office, also said green production has begun to take shape on the plateau and local governments are committed to an eco-friendly path to economic growth involving low and intensive utilization of resources.

Most of the plateau, covering about 2.6 million square kilometers and hailed as the "roof of the world", is over 4,000 meters above sea level.

According to the white paper, since 2004 the government has invested more than 3 billion yuan ($447 million) in Tibet, directed to more than 450 projects in 10 categories related to agriculture and animal husbandry unique to the region, including highland barley, and traditional Tibetan medicine.

More than 100 leading enterprises have emerged as a result, boosting local farmers' and herdsmen's incomes by a cumulative 1.18 billion yuan and benefiting 1.75 million people.

He said about 700,000 ecological protection-related posts, such as ranger and environmental supervisor, have been offered to people from poverty-stricken families.

Sanjiangyuan in Qinghai, home to the headwaters of the Yangtze, Yellow, and Lancang (Mekong) rivers, was designated a national park, the first of its kind, in 2005.

"The channels from which farmers and herdsmen in the park get incomes have been constantly broadened thanks to a series of measures authorities have taken," said Tian Jinchen, vice-governor of Qinghai.