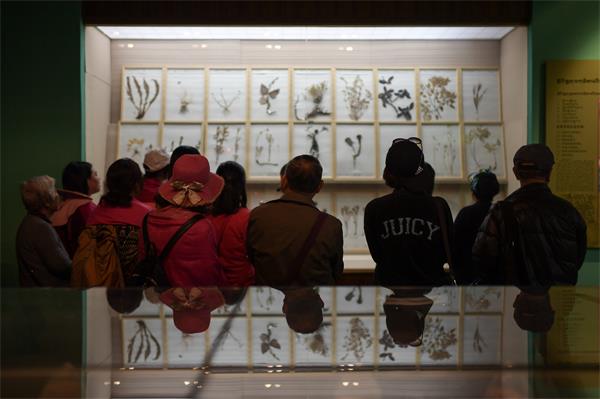 Visitors are attracted by exhibits on display in a Tibetan traditional medicine museum in Xining, Qinghai province. Wu Gang/Xinhua

At 2:30 pm, Tashi Tso from the Qinghai Tibetan Hospital put on a pair of disposable gloves and began to take samples of a batch of newly arrived Tibetan medicines.

“The samples will first be sent to experts for visual inspection, and then for biochemical testing,” Tashi Tso said. “We combine traditional methods with modern technology to ensure the quality of the medicine.”

Tibetan medicine, known as sowa rigpa in Tibetan, is over 2,000 years old. It has absorbed influences from traditional Chinese, Indian and Arabic medicine.

It is mainly practiced in the Tibet autonomous region and the Himalayas.

Similar to traditional Chinese medicine and in sharp contrast to Western medicine, it uses herbs, minerals and sometimes insects and animals to treat afflictions. It is particularly well known for its digestive, cardiovascular and rheumatoid treatments.

As most traditional Tibetan medicines are handpicked by Tibetan doctors, the pills often differ in weight and water content. Today, the manufacturing process is being transformed from old manual workshops to new scientific and standardized methods.

“For example, in the old days, a medicine for digestive treatments was packed in paper bags, which did not preserve it well. Now there is a production line to automatically produce and pack the medicine,” Tashi Tso said.

His hospital in Xining, the capital of Qinghai province, produces 368 types of Tibetan medicine with an annual output of 200 metric tons. Some 29 Tibetan medicine production bases across the province can produce 1,042 types of medicine.

To accelerate the development of traditional medicine, China has been increasing investment to build more standardized factories to combine it with modern technology.

In Qinghai alone, some 15 companies produce 160 types of Tibetan medicine. In 2016, the total industrial output value of these companies reached 2.3 billion yuan ($366 million).

Meanwhile, research institutes are also burgeoning in Tibet and Qinghai and Gansu provinces.

A laboratory at the Qinghai Institute of Tibetan Medicine is researching the effects of mineral elements of such medicine.

Tibetan medicine was added to China’s intangible cultural heritage list in 2006. The ancient practice has also won the support of the World Health Organization.

“The only way for traditional medicine to gain prominence outside the Qinghai-Tibet Plateau is to combine it with modern science,” said Dorje, dean of the institute.