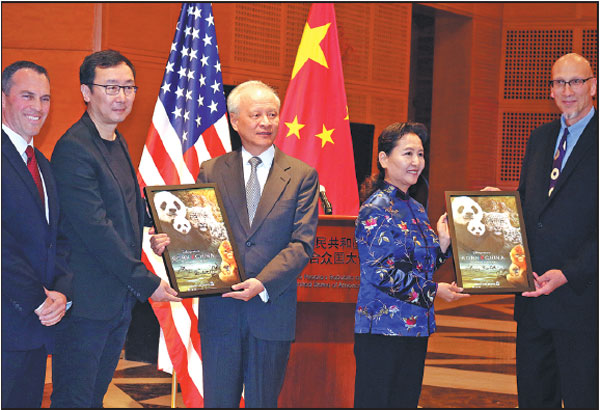 Cui Tiankai, ambassador to the US (center), Walt Disney Studios Vice-President Paul Baribault (left) and Chinese documentary director Lu Chuan (second from the left) display a poster for Born in China, a Chinese-American coproduction that takes viewers on an epic journey into the wilds of the country. The film was released in the United States over the weekend.Zhao Huanxin / China Daily

Wildlife movie coproduction shows angle not known to many

Born in China, a Chinese-American wildlife documentary coproduction, has been offering US moviegoers a feast for the eyes and food for thought since opening in US theaters a day before Earth Day, April 22.

The film's stunning imagery was captured over three years, largely in Qinghai and Sichuan provinces, and it follows the lives of pandas, golden monkeys and snow leopards, with additional footage of red-crowned cranes and chiru, or Tibetan antelopes. It was coproduced by Disneynature and Shanghai Media Group.

"The film serves to increase humans' awareness of the importance and urgency of protecting wildlife," Chinese Ambassador to the US Cui Tiankai said at a reception at China's embassy in Washington on Friday.

"Besides, we can learn much from animals, such as pandas, on how to coexist peacefully and harmoniously," Cui told a group of US guests before the showing of the film.

Susan Thornton, acting assistant secretary of the US State Department, told China Daily, "It would be good for American audiences to see Chinese people caring about the planet, and conserving wildlife and natural spaces."

Roy Conli, producer of Born in China, said he had been "totally unaware" of the wilderness of China, including what was happening on the Qinghai-Tibet Plateau and in the mountains of Sichuan, before the making of the film.

"It just shows you how wondrous this planet is," said Conli, the Oscar-winning producer of Big Hero 6. "We need to protect animal populations ... in order to protect ourselves."

For Lu Chuan, an accomplished Chinese director, directing the film allowed him to share the beauty of China, and Chinese people's attitude toward life.

"This is a film that will tell our audience that besides Beijing and Shanghai, and besides heavy industries and pollution, China has incredibly beautiful sides that many are hardly aware of - the crystal clear skies, the stunning sceneries and wildlife habitats," Lu said.

In addition to appearing at US theaters, Born in China will be rendered into a dozen languages and later released in over 100 countries and regions, according to Cui Yuying, vice-minister of the State Council Information Office.

Cui said the China-US coproduction is emblematic of the decision at the April Mar-a-Lago meeting of President Xi Jinping and US President Donald Trump to ratchet up bilateral exchanges, including cultural and people-to-people exchanges.

"The State Council Information Office welcomes and will continue to support international organizations to tell China stories ... to ramp up understanding and friendship between Chinese and people in the US and the rest of the world," she said.

The film's Chinese version was released in August. A trailer is available at nature.disney.com.

Deng Leshuo in Washington contributed to this story.