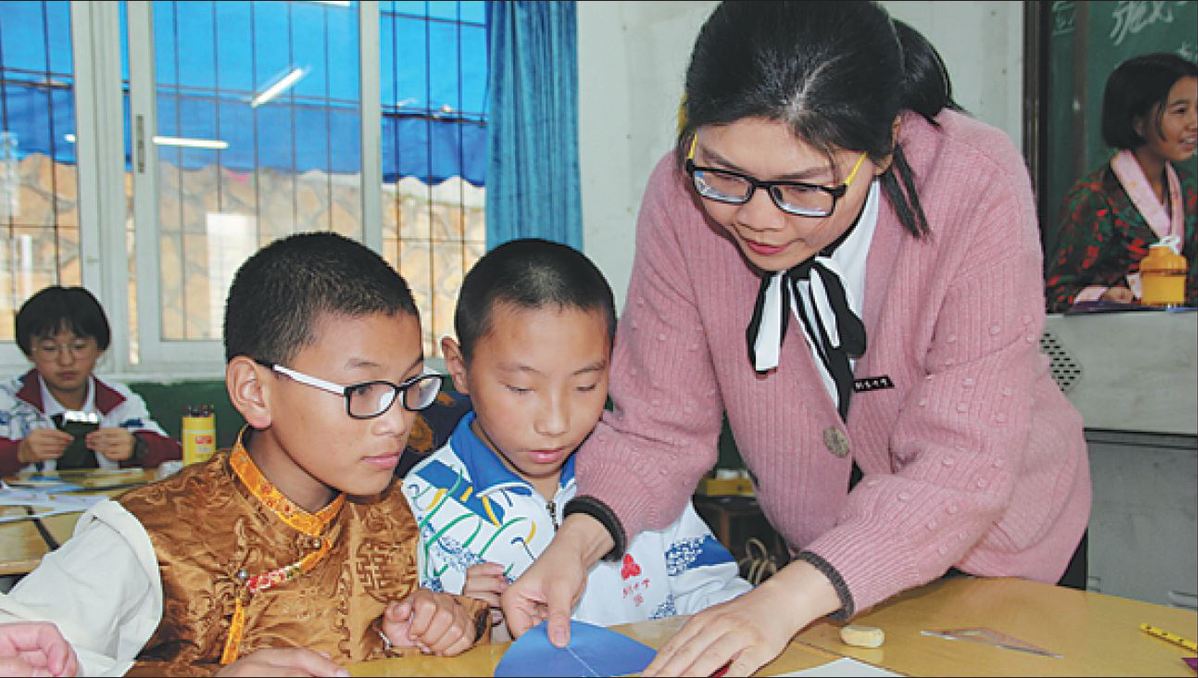 Since the Liedong Middle School in Sanming, Fujian, set up Tibetan classes in 1995, more than 1,200 students got the chance to continue their study in universities. [Photo provided to China Daily]

Teachers in classes specifically for Tibetan students in the Liedong Middle School in Sanming, Fujian province, share a nickname. It is 24365, which means they are always at work or on call at home for 24 hours a day and 365 days a year to teach and take care of the teenagers who have traveled far for a better education.

Lin Qing, a Chinese teacher who started to teach in Liedong Tibetan classes since 1995, said during three years of study, students could only return to visit their homes just once or twice due to the distance involved.

"In general, middle schools in developed provinces provide better facilities and teachers with more experience than the Tibet autonomous region so children left home for here when they were very young for education," Lin said.

"I must fulfill the expectation of Tibetan parents who hope their children learn something far away from home and take good care of my students in daily life," she said.

In 1985, the central government launched a program that initially saw schools in 16 provinces and municipalities, extended to 21, enroll about 1,700 students from Tibetan elementary schools every year to help them receive a better education, the Tibet autonomous region's government said. Accommodation and meals for the students were free.

Under the program, both central and local governments invested in setting up middle schools specifically for Tibetan students or establishing Tibetan classes in existing middle schools.

After finishing middle school, students can further apply for high schools in developed provinces after passing an entrance exam for which they can either choose all Chinese or half Chinese and half Tibetan for the language test.

Fujian inserted Tibetan classes into the Liedong Middle School, one of top schools in Sanming as the city was rated by the central government as one of the national model cities that had developed well.

"Most of our Tibetan students come from farmer or herder families, and they have never traveled to provinces outside Tibet before. Study experience here can improve their academic performance and broaden their horizons," Lin said.

Besides teaching, the core task, each teacher at the school is responsible for six students' daily life including taking them to hospital, accompanying them to exhibitions, cooking with them on festivals and teaching them household skills.

"Outside the classroom, I am not only their teacher but their 'mother'. At such young ages, they need my company," she said.

Teachers for the Tibetan classes need to work longer hours than their colleagues for other classes because their students don't return home on weekends or during summer and winter vacations.

Lin always read classic novels such as The Adventures of Huckleberry Finn by Mark Twain to her students. "Most of them haven't read any out-of-classroom books and they love my reading novels to them," she said.

In 2018, during a reunion with students who enrolled in 2005, Lin found that a student who works as a civil servant in Lhasa is also a volunteer teacher at a school and he reads novels to children like she did.

"He told me that he was impressed by the vitality and perseverance of the characters in the novels I read and wanted to do the same thing to his students. I was surprised that a small part of my routine work influenced him for such a long time," Lin said.

However, Lin feels quite guilty about her son, now a junior in university, because she said she hadn't cared or taught him properly.

"When he was a child, I didn't read any novels or bedtime stories to him because I usually had a sore throat after a day's work and couldn't speak too much but only hug him to show my love," she said.

Lin's husband, a contractor, traveled across the country to work on construction sites all year round when their son was 4 and didn't fix his workplace in Sanming until the boy attended middle school.

"He has a poor reading comprehension and can't concentrate on research or things like that. I guess that's because I and my husband didn't give him enough care or instruction," Lin said. "However, my students also call me mom and they also need my love."

Lin is happy to see her and her colleagues' efforts paid off as the majority of their students returned to Tibet and work as soldiers, bank clerks, doctors, policemen, teachers and civil servants.

"Most of them chose to return to Tibet after college graduation because the region needs local talent and they can get more chances there," she said.

Since the Liedong Middle School set up Tibetan classes in 1995, more than 1,200 students got the chance to continue their study in universities. More than 800 students went back to Tibet for work after graduation.

"Every time I chatted with my students and found that they performed well in their positions to boost development in Tibet, I reaffirmed my original intention to be a teacher for more children like them," Lin said.

During the two decades, Lin found it easier to teach Tibetan students year after year as new recruits are becoming more knowledgeable and better educated.

"Children from Tibet now have a larger amount of reading and better communication abilities. That may be due to better elementary school education in Tibet and highly educated parents," she said.

Lin said that in near future, Tibetan children will not have to travel far to other provinces for better education because more developed provinces and cities are helping build and upgrade schools in Tibet. More and more new schools were built in the region.

For example, in 2014, Lhasa-Beijing and Lhasa-Jiangsu experimental middle schools were put into use. The two local governments separately sent about 50 teachers to aid with teaching.