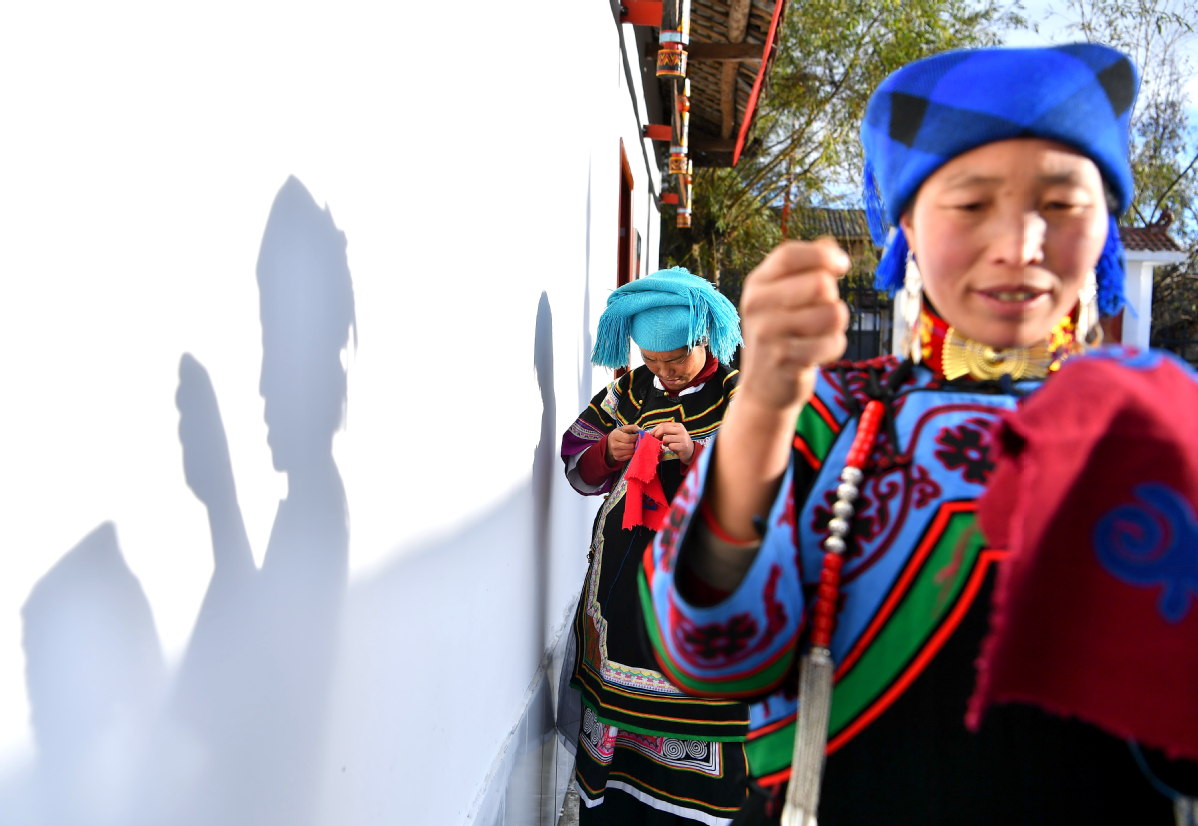 Women of the Yi ethnic group embroider at a workshop in Jinyang county, Sichuan province, earlier this month. Thanks to efforts such as embroidery skills training, seven counties, including Jinyang, have been lifted out of absolute poverty. [Photo by He Haiyang/For China Daily]

Endowed with rich cultural and natural resources, many remote Chinese villages previously mired in poverty have shrugged off their backward images thanks to government support for the development of tourism with local characteristics.

Figures from the Ministry of Culture and Tourism show that around 4.3 billion yuan ($655 million) of investment has flowed to the countryside and areas trapped in poverty during the 13th Five-Year Plan (2016-20) period, offering a sound foundation for tourism development.

Among the poverty alleviation campaigns, projects encouraging inheritors of intangible cultural heritage in rural areas to set up their own workshops have played a vital role in helping residents get out of poverty, senior ministry officials said.

"These former poverty-stricken areas have a number of cultural and tourism resources," Li Qun, vice-minister of culture and tourism, said at a news conference in Beijing on Wednesday. "On the premise of protecting the resources, we are making great efforts to turn resources into industries to bring jobs and benefits to residents there."

Wang Chenyang, director of the ministry's intangible cultural heritage department, said, "These tourism development projects can get help from not only administrative units, but enterprises, schools and even individuals as they have enormous commercial potential and can help many people find jobs".

He said nearly 1,000 workshops have been set up in former poverty-stricken counties.

"For example, Nyemo county in the Tibet autonomous region now has 10 workshops producing goods based on intangible cultural heritage, offering jobs to 152 households there," he said. "Around 560 residents have benefited from these workshops and workers there have salaries of around 3,000 yuan a month."

He added that producing workshop leaders is vital for the project.

"Shi Liping, one of the inheritors of Miao embroidery in southern Guizhou province's Songtao Miao autonomous county, has helped to train nearly 10,000 women workers," Wang said, adding that her startup had offered 3,800 jobs to women in the county.

Shan Gangxin, the ministry's director of resources development, said at the news conference that in the past few years the ministry and the National Development and Reform Commission have jointly invested 6.5 billion yuan in 656 tourism-related projects in formerly poor areas in places including Gansu, Sichuan and Yunnan provinces.

"So far, we've set up five training bases for tourism-driven poverty alleviation nationwide, which more than 8,000 tourism insiders from rural areas have attended," he said. "We've also opened online courses since the outbreak of the COVID-19 epidemic and given lectures to over 650,000 people."

He said the ministry will help poorer areas promote their tourism products through livestreaming and new media products. Such channels can be effective, with Tamdrin, an ethnic Tibetan youth from Garze Tibetan autonomous prefecture in Sichuan, attracting crowds of travelers to his hometown in Litang county after becoming an online phenomenon due to his good looks.