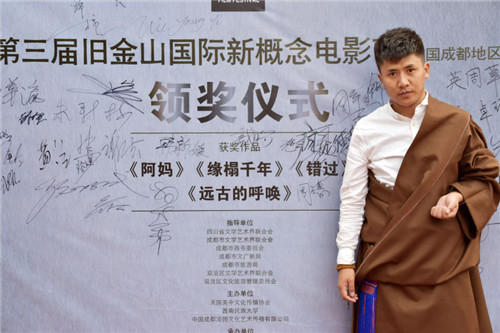 On November 29, the 3rd San Francisco International New Concept Film Festival's relay ceremony was held in Shuangliu, Chengdu, China. The documentary of the Tibetan humanities - Ama - was nominated as the Outstanding Student Documentary at the festival.

The film is directed by young Tibetan director Jigme at Sichuan Journal of the Party Group, "Tibet Sunshine" Media Center. The focus of the film is how the people can thrive in such an environment.

The San Francisco International New Concept Film Festival is held from October 6th to the 9th. It is a non-profit organization approved by the US federal government. The purpose of the festival is to bring together outstanding film makers from all over the world to explore new ideas and practice together in the future development of film.

Among the awardees are Will Wallace, a well-known Hollywood producer and director, Patricia Fishe, the consul general of the Chinese Consulate General in San Francisco, Deng Xiaoyong, cultural counselor and consul, and Wang Shi was also in attendance.