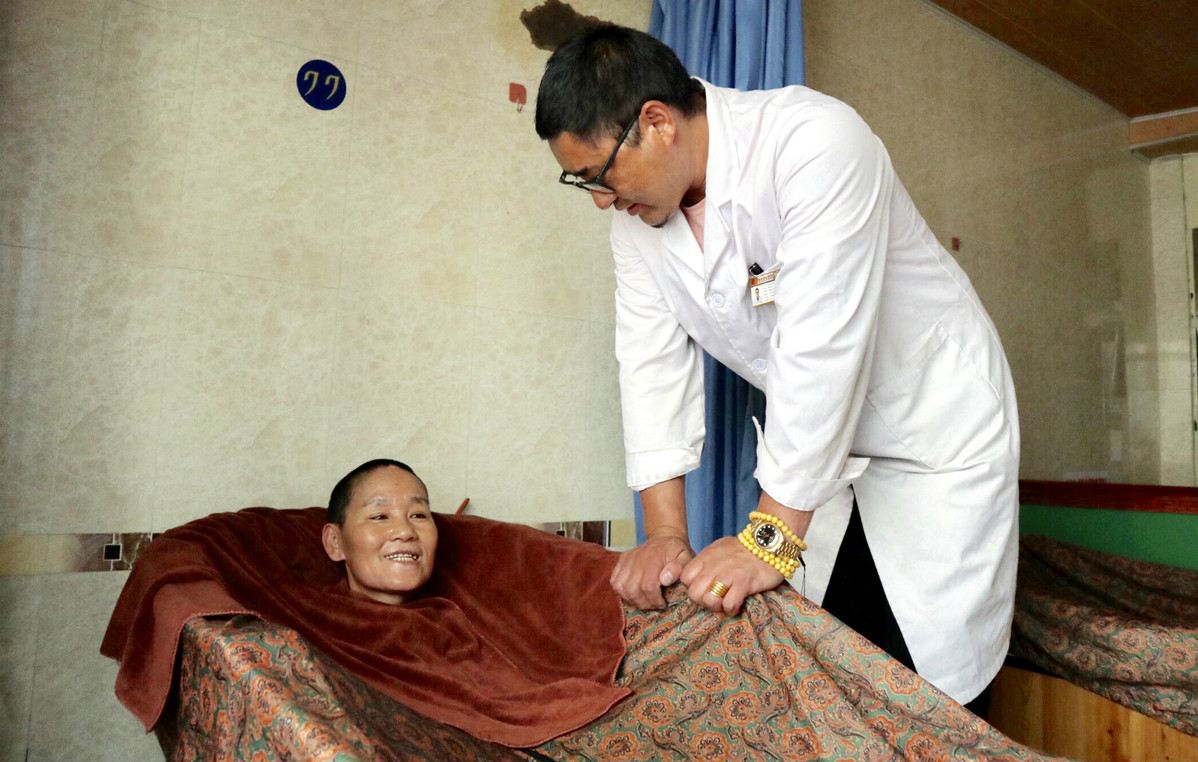 In the Tibet autonomous region, 34-year-old Lhamo Tsering, a resident of Lhasa, was suffering. It was 2014, and she had just given birth. Painful, numbing arthritis followed, affecting her entire body.

The pain was unrelenting - legs, arms, hands, eyes, face, joints, scalp and even her fingernails. She had difficulty with daily needs, such as using the bathroom.

"Except for my hair, every part of me was in pain," she said. "Even a gentle breeze could bring it on and was a source of dread. I was afraid of touching cold things such as steel, water, glass or even a thermos bottle. I feared I would become paralyzed or die. None of the Chinese or Western medicine had worked."

She became reclusive to stave off the pain.

"I shut myself in a room for months. I couldn't go out, and I missed eating the spicy foods that I was advised to avoid," she said.

Then came the miracle - an ancient therapy. Or, if it wasn't exactly a miracle, it at least provided her with relief.

Lhamo Tsering turned to a Tibetan medical treatment known as lum, basically a series of hot baths in a tub filled with an herbal soup. This therapeutic soup is customized according to ancient recipes to meet the needs of each patient, selecting from a list of more than 100 herbs that are said to have medicinal properties.

Lum bathing was recognized as an intangible cultural heritage by UNESCO in November. The therapy is one of the four main physical therapies written in the Gyud phyi - four Tibetan medical tantras - a classic of medical instruction compiled in the eighth century. According to legend, the treatment had been passed down informally for millennia before that. Testimonials to its effectiveness are abundant.

A typical treatment regimen consists of two baths every day for seven days in which the water temperature increases gradually from about 37 C on the first day to about 42 C after three to four days. The temperature is then gradually taken down to the beginning level by the end of the treatment. Severe symptoms may require 14-or even 21-day courses. Each session typically lasts 45 minutes to one hour.

Tashi Tsering, 53, head of the Institute of Tibetan Medicine and Astrology in Lhokha, said lum bathing therapy had a good curative record for conditions ranging from rheumatoid arthritis, lumbar disc hernias and other lower back problems to paralysis and skin diseases.

Of course, there are no guarantees. Traditional therapies, including lum bathing, are typically based on concepts of overall wellness, rather than attacks on a particular condition or pathogen with drugs or other interventions, as with Western medicine. They're as much about prevention as they are about cures.

One result of that approach is that it's difficult to nail down the relationship between traditional treatments and specific outcomes. Faith may be in play as much as science.

But for people like Lhamo Tsering, there is no doubt. "I had three lum bathing treatments, and I recovered," she said. "I didn't need to spend a lot of money."

An element of traditional holistic Tibetan medicine known as the Sowa Rigpa, the bathing therapy in modern times is now on the radar for cultural preservation. Only a handful of people have inherited the required skills, and proponents want to ensure that those survive in an age of analytical Western science.

Earlier this month, more than 100 experts and scholars from Tibetan communities in four provinces and Tibet discussed the future of the tradition at an academic conference hosted by the region's health commission and the Institute of Tibetan Medicine and Astrology.

Drolma, 50, director of the institute's lum bathing department, said the herbal baths are popular with Tibetan minorities around the country because of the unique approach to disease prevention and overall support of health.

"We know from thousands of years ago that the ancestors had a high awareness of disease prevention and healthcare," she said.

Various efforts have been made in the region over the last three decades to protect and promote the tradition for the benefit of younger generations. With support from the central and regional governments, those efforts seem to be working.

"In 1983, when the bathing therapy was first added to our hospital, we had only 12 beds. In 2005, we received financial support from the National Administration of Traditional Chinese Medicine for expansion, and now the department has 69 beds for lum bathing patients," Drolma said.

Preservation of the bathing therapy is the institute's way of supporting the region's poverty alleviation efforts.

While overcoming poverty often involves the introduction of innovative business activities, the government's view is broader. It believes that healthy people are more likely to rise, and it sees poor health as reinforcing poverty.

In line with that concept, holistic treatments that encourage overall health are included in the basket of activities that improve livelihoods.

One of the biggest worries Tibetan doctors have about expanding the therapy is the lack of specific standards. Businesses such as bath shops, swimming pools, saunas and medicinal hot springs at hotels may vary widely in technique.

"Abuse and misuse of the practice is increasing. It's essential to supervise providers," said Tsetan Tobgyal, a Tibetan doctor at the region's Institute of Tibetan Medicine and Astrology. "It's wrong to use a single herbal recipe for all cases."

Mindrup, a doctor and lum bathing cultural inheritor at the Institute of Tibetan Medicine and Astrology in Lhokha, said protecting the environment where the medicinal herbs grow is also essential, along with expanded planting. No herbs, no treatment.

Young people are not supposed to develop debilitating arthritic symptoms in the prime of life - not at age 17. That's why Yeshi Wangchuk's parents were worried. His condition crept up slowly but became severe in April, threatening to immobilize him.

"I couldn't do housework or sports," he said. After six days of lum bathing, he's encouraged.

"I feel I have gotten much better," he said, expressing hope that a few more treatments will bring him back to normal.

For him, that will be all the proof he needs.