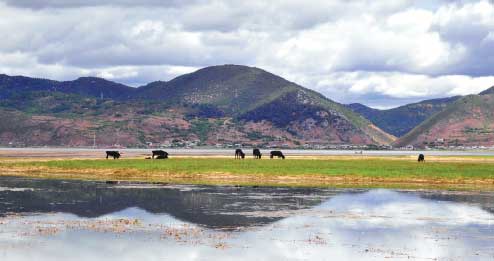 But its association with the "mystical, harmonious valley" described in the book－especially since Diqing Tibet autonomous prefecture's Zhongdian county changed its name to Shangri-La in 2001－is bringing newfound prosperity to the settlement, which became a city in 2014.

Its name translates from the local Tibetan dialect as, "the sun and the moon in one's heart".

But many visitors to the area fail to see that, behind the romantic foreground, it has long remained one of the lowest-income communities in China. Forty-five villages fall below the poverty line.

That's largely because of the natural features that conjure its splendid scenery.

Shangri-La's average altitude is nearly 3,460 meters, and roughly 94 percent of its terrain is mountainous. It's not easily accessible and is prone to such natural disasters as floods. 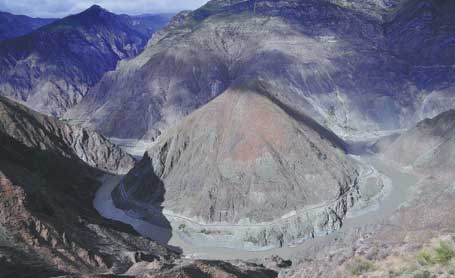 A huge bow of the Jinsha River, an upper section of the Yangtze. [PHOTO BY XU LIN/CHINA DAILY]

CTS showcased the achievements of its poverty-alleviation tourism program and several travel products designed for it.

The group has sent seven senior employees to take temporary positions in Yunnan's government to develop tourism to alleviate poverty. They include Jiang Lili, who works as Shangri-La's deputy mayor. "Our goal is to attract more visitors with these well-designed, quality tourism products."

Developers of these products have engaged local poverty-alleviation officials and examined tourists' demands.

"Many travelers are interested in these new offerings," says Zhang Jinyuan, who's in charge of CTS' group-tour products in northern China.

"Online and phone inquiries have increased substantially. Other travel operators also contact us to ask about details and whether we can offer their customers customized itineraries."

He recommends an in-depth six-day trip to Shangri-La and Dechen county, which are separated by the Jinsha River. The price is 3,580 yuan per person, excluding air tickets.

"It stands out by providing three unique intangible-cultural-heritage workshop experiences," he says.

Travelers on this itinerary visit Shangri-La's Nixi township and learn how to make its celebrated black pottery, which dates to over 2,000 years ago.

They also dine on chicken stewed in black-ceramic pots. The dish became nationally famous after it was featured in the hit TV-documentary series, A Bite of China.

Balagezong Grand Canyon in Shangri-La is a good place for hiking. [PHOTO BY XU LIN/CHINA DAILY]

Visitors stay in five-star accommodation in Shangri-La and a boutique hotel in Dechen, where they can see the Meili Snow Mountains from their rooms.

Many watch sunrises over the highest peak, the 6,740-meter-high Khawa Karpo. It's considered auspicious to see the summit that's usually shrouded by mist and clouds.

"It's important to transform and upgrade tourism to increase the brand awareness of programs related to local culture and folk customs. The key is locals' desire to become involved in poverty alleviation through tourism."

Rural cooperatives distribute profits among villagers who have invested in tourism-development projects at the end of the year.

Jiang says she has great respect for a young ethnic Tibetan man from Shangri-La named Norbu, whose right leg was amputated after a car accident. He formed a cooperative for over 20 people with disabilities to raise black goats. Their herd today exceeds 1,000 and provides steady income.

"These people are salt of the earth," Jiang says.

"They want better lives. Their hardworking spirit of perseverance is indispensable to our national fight against poverty."

Authorities are also sending officials and tourism-industry staffers to visit other scenic areas in China to learn from their successes.

A high-speed railway linking Shangri-La and Yunnan's Lijiang city will be completed next year, reducing travel times between the two tourism hot spots to one hour. A highway connecting them will also open next year, reducing driving times from four hours to 1.5 hours.

Dechen county's vice-magistrate, Wu Chen, is another CTS employee who has taken a temporary local-government position in Yunnan.

"We encourage villagers to renovate their residences into homestays and construct such infrastructure as public toilets and small shops," Wu says.

Dechen's Niding village is building a Tibetan-style boutique hotel for tourists, who come for mountain views and hiking. It hopes to develop road access and travel facilities.

"The greatest challenge in rural areas is the lack of funding and amenities," Wu says.

"The priority is to improve the fundamentals for scenic areas to ensure visitors enjoy these new destinations."