In his 1933 novel Lost Horizon, British author James Hilton described "Shangri-La" as a mysterious valley in the Himalayan region where the main character, Hugh Conway, a diplomat from his country, hopes to find peace from the conflicts of the world.

In an interview, Hilton said he had imagined the place based on research at a museum library.

"A full moon rose, touching each peak in succession like some celestial lamplighter, until the long horizon glittered against a blue-black sky," he wrote in the book. 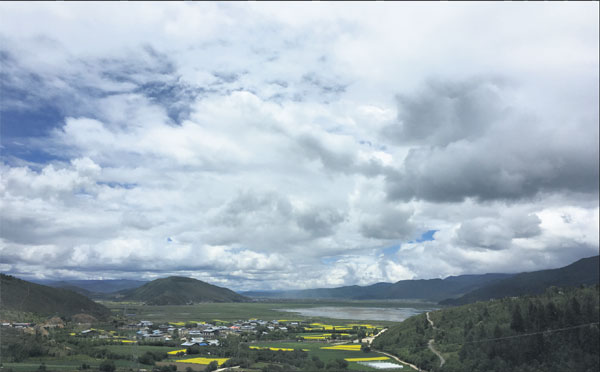 Napa lake in countryside Shangri-La, Yunnan province, in June. The area is a top destination for migratory birds.

In 2001, the ancient town of Zhongdian in Southwest China's Yunnan province was renamed Shangri-La. Located at an altitude of more than 3,000 meters above sea level, it is called Gyalthang - the "valley of the blue moon" - in Tibetan. Shangri-La is the seat of the local government of the Diqing Tibet autonomous prefecture.

According to one theory, Zhongdian was renamed because it bears a strong resemblance to Hilton's fictional land, while another suggests it was done to boost tourism.

Nevertheless, this town in Yunnan's northwest - with its old wooden houses, quiet alleys, surrounding mountains, a large lake, mastiffs and yaks - is charming.

And, some residents, local and foreign settlers alike, are working to raise the remote town's profile.

The larger county's population of 170,000 is mostly made up of Tibetans. Members of the Lisu ethnic group, among others, also live there.

Dakpa Kelden, a 47-year-old Tibetan entrepreneur and art patron, returned to the town in 1987 from India. The town's airport was built in the 1990s, when foreign tourists first started to arrive.

Shangri-La was a different place back then, he says.

The area's main business used to be exporting wood, but a flood of the Yangtze River halted that trade. Subsequently, tourism picked up and is now estimated to fetch 1 billion yuan ($147 million; 123.4 million euros; ￡127 million) annually.

Dakpa Kelden runs a boutique hotel and a thangka art school near the town's public square that offers a stunning view of a Buddhist temple, especially at night when its top facade is lit.

Chinese youngsters regularly enroll for residential programs teaching the centuries-old Buddhist art form, which uses colors made by grinding materials such as rocks and pearls.

"Our purpose (at the training center) is to give them the required skills and knowledge of the history of thangka painting," he says.

Karma Tachen, 31, vice-chairman of Shangri-La Highland Craft Brewery, studied the art form in college in his hometown in neighboring Sichuan province. Lately, he has been living the "life of Zen" in Shangri-La after spending some time in Italy, where he had gone to learn design.

The company on the town's outskirts, where a new development area is taking shape was established by Songtsen Gyalzur, a Swiss real estate developer of Tibetan origin, in 2009.

With a growing appetite for craft beer in the country and the availability of natural resources like fresh water and highland barley in Shangri-La, it is aiming to increase production from 4,000 metric tons a year to 24,000 tons in the future.

The company has invested 45 million yuan of its planned 98.8 million, Karma Tachen says.

While sales have been limited to Yunnan so far, they will likely enter Sichuan, the Tibet autonomous region and Qinghai province, in the country's northwest, later this year.

The company's beer bottles feature artwork inspired by Tibetan folk stories, but demand for craft beer among young people locally has yet to pick up.

Shangri-La's mysticism and fine summer weather have drawn many foreign tourists over the years, but there are few who have settled permanently.

Cafe owner Uttara Sarkar Crees came to Shangri-La nearly 20 years ago and has decided to stay there. She had lived in Africa, Nepal and her home country, India, before beginning a life in China.

Shangri-La has always been rich in culture and biodiversity, she says.

"There's a lot more integration among the ethnic communities today."

A huge fire raged through the old parts of the town in January 2014, dealing a big blow to more than 300 business establishments, including hers. Although the rebuilding is ongoing, tourist numbers have fallen in the past two years because of the large-scale destruction of restaurants and hotels.

"Some expats moved out after the fire," says Guillaume de Penfentenyo, a partner at Flying Tigers, a bar frequented by foreigners that takes its name from the US armed forces' volunteers who helped China fight Japanese attacks during World War II.

Before settling down in Shangri La in 2015, the 29-year-old from France had lived for a while in the city of Wuxi, in East China's Jiangsu province.

He says property rents here have increased in recent times and essential commodities like vegetables are expensive because local traders get them from other parts of Yunnan.

He doesn't find Shangri-La exotic or laid-back, but rather a place with "quality of life". 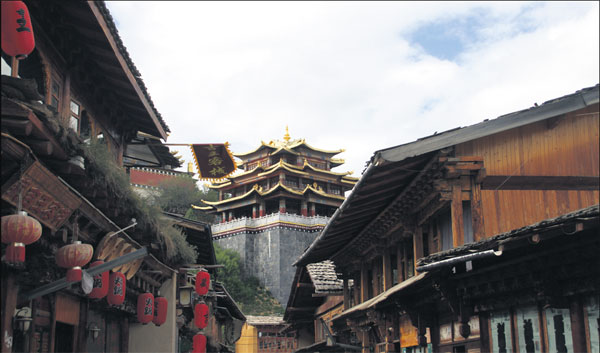 A view of the main Buddhist temple in an old part of the town. A fire in 2014 destroyed a large number of hotels and houses here. The rebuilding continues. Photos by Shi Wenzhi / China Daily