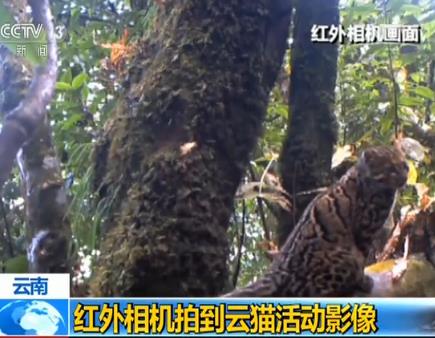 A marbled cat has been filmed at the Gaoligongshan National Natural Reserve in southwest China's Yunnan province.

The cat is listed as a critically endangered animal in China.

Staff at the protection area spotted the cat when collecting footage from infrared cameras. The cameras, set up in the wild, are triggered by motion and automatically being filming when an animal crosses in front of them.

The cat, with a calico coat, appeared in two videos. In the first one, it simply crosses in front of the camera before moving out-of-view. In the second video, the cat is seen sitting on a tree and looking around. After a brief time, it is seen slowly walking away.

Experts say that marbled cats live in forests in tropic and subtropical zones. They have been found in Yunnan and Tibet, but the actual number of the animals remaining in the wild is unclear.