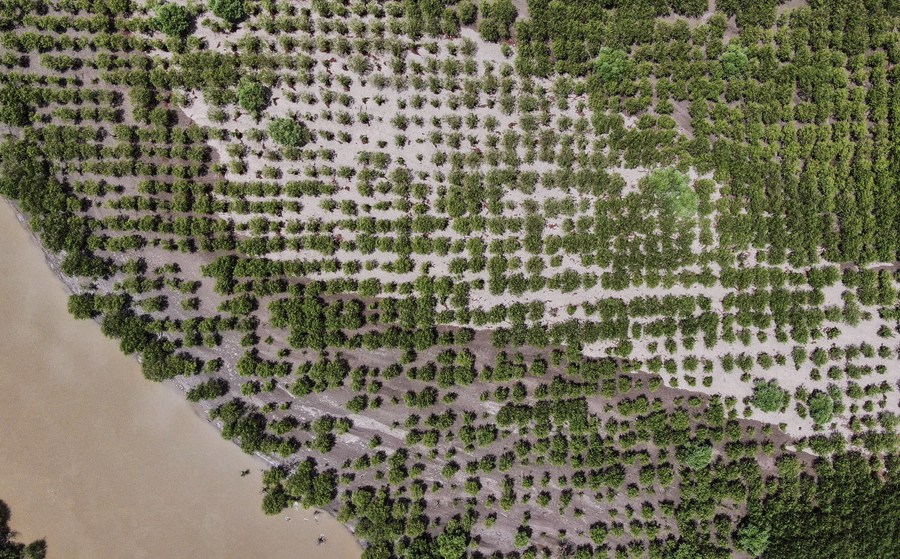 LHASA, Nov. 29 (Xinhua) -- For herder Lhaba Cering, the desolate late autumn scenery he has experienced since childhood has become a thing of the past in his home village of Gangshi, southwest China's Tibet Autonomous Region.

The village, with an average altitude of more than 4,000 meters in Lhaze County of Xigaze City, used to be nothing but barren land covered in gravel and coarse sand.

Now, after the launch of a grass plantation project, it is adorned in a green "coat" and full of vigor and vitality.

The low-temperature-tolerant grass, cultivated by experts from the Chinese Academy of Sciences, has an extensive root system and a strong tolerance to cold, drought and barren land. Its yield of grass per hectare can reach about 15,000 kg.

Li Yongsheng, an expert in planting grass, said that the grass, sown in spring and harvested in October, can help prevent and control desertification during growth. The roots of the grass will also become fertilizer to enrich soil after harvest.

"Life is much better now. We used to have land filled with sand, now yaks and sheep are well fed and the environment is much better," said Lhaba Cering.

Gangshi's grass project began in 2020 when a cooperative was set up to grow the grass on about half a hectare of land. The maiden attempt bore fruit and a large-scale grass plantation was soon initiated.

Dechen Yudron, head of Gangshi's Shichen Township, said that almost 600 herders have joined the project, which has increased the average annual income by 1,000 yuan (about 157 U.S. dollars) per household.

The grass project is only a small part of Tibet's constant efforts to strengthen ecological protection.

The Qinghai-Tibet Plateau is known as "the roof of the world." As Tibet is an important guarantor of China's environmental security, the Chinese government attaches great importance to the region's environmental protection.

From 2016 to 2020, the region spent 20.23 billion yuan on ecological protection, according to data from the regional forestry and grassland bureau.

In 2020, the region's forest coverage reached 12.31 percent, and the comprehensive vegetation coverage of natural grasslands grew to 47.14 percent, up from 12.14 percent and 42.3 percent respectively in 2016.