The plateau region in southwest China will celebrate its 70th anniversary of the peaceful liberation this year. People in Tibet certainly have a lot to cheer for with a substantially enhanced sense of gain, happiness and security.

BEIJING, March 9 (Xinhua) -- National lawmakers and political advisors from Tibet Autonomous Region are joining those from the rest of China in deliberating the country's development plans at the ongoing "two sessions" in Beijing.

Such a democratic practice was unimaginable for the region before 1951. Thanks to a series of historical events, it has become a reality. The peaceful liberation of Tibet in 1951, the democratic reform in 1959 and the establishment of Tibet Autonomous Region in 1965, have paved way for the remarkable development in the region and improvements in the lives of people of all ethnic groups there.

The plateau region in southwest China will celebrate its 70th anniversary of the peaceful liberation this year. People in Tibet certainly have a lot to cheer for with a substantially enhanced sense of gain, happiness and security.

The elimination of extreme poverty in the region last year is just one example of its historic progress in economic, social and human rights fields over the past 70 years under the leadership of the Communist Party of China (CPC).

With historic leaps in development, people in Tibet have enjoyed a much better life. Those who shook off poverty no longer worry about their needs of food, clothing, housing, education and medical care. The region offers 15 years of free education. Besides, traditional culture has been effectively protected and inherited, and medical and health care has greatly improved. 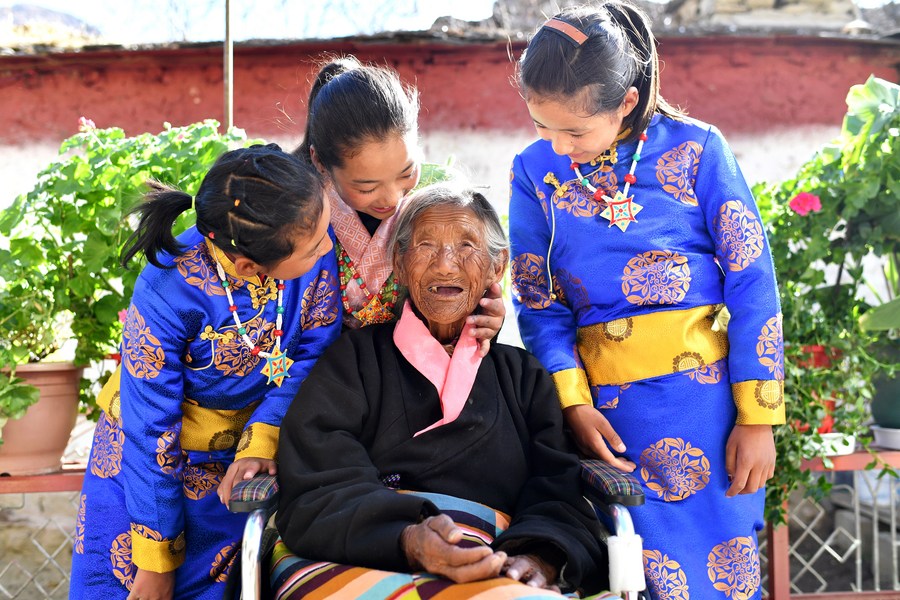 Some anti-China external forces, however, have intentionally turned a blind eye to the remarkable progress. Moreover, they keep using Tibet-related issues to interfere in China's internal affairs.

A U.S. act, the so-called "Tibetan Policy and Support Act of 2020," passed in December last year, for example, maliciously distorts Tibet's social development, makes groundless accusations, denigrates China's ethnic and religious policies, and interferes in the normal reincarnation procedure of living Buddhas under the pretext of human rights and religion.

The fact is that the peaceful liberation in 1951 marked an epoch-making turning point in the social development history of Tibet. The democratic reform in 1959 abolished the centuries-old feudal serfdom in Tibet, where serfs had little food, scanty clothing and no human rights at all, and they struggled hopelessly on the very bottom rung of society and suffered from massive exploitation and oppression by privileged government officials and lamas. Nijia (1st L) and his family members pose for a photo in front of their house at the Rongma relocation settlement, a local poverty alleviation project, in Gurum Township of Lhasa, capital of southwest China's Tibet Autonomous Region, April 2, 2020. (Xinhua/Zhan Yan)

Before the peaceful liberation, there were no highways in Tibet. Today, the total length of highways has neared 120,000 km in the region along with railways and airports.

The population of Tibet has increased from 1.23 million in 1959 to 3.5 million in 2019, with ethnic Tibetan people accounting for over 90 percent of the region's total. The average life expectancy in Tibet reached a record high of 71.1 in 2020, doubling the figure in 1951.

Today's Tibet is marked by ethnic unity and religious and social harmony. There are 1,787 sites for the practice of Tibetan Buddhism and more than 46,000 resident monks and nuns in Tibet. Traditional religious activities are held normally.

Ever since ancient times, Tibet has been an integral part of China, and the Tibetan ethnic group has been a communal member of the Chinese nation sharing a common destiny. China will never allow any malicious foreign interventions of any form in the region's religious affairs or allow anyone to sabotage the stability and prosperity of the region, under the guise of religious freedom, human rights or whatever.