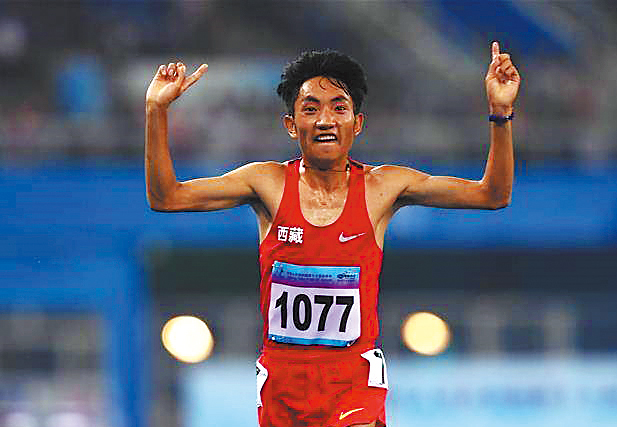 Boosted by his recent half marathon victory in the national team testing event, Chinese marathon runner Duo Bujie has vowed to maintain his momentum and fight for a top-eight finish at next summer's Tokyo Olympics.

The 26-year-old Duo clocked 1 hour, 5 minutes and 8 seconds to win a half marathon test event staged by the national team in Linzhi, Tibet autonomous region, earlier this month.

Given that the race was staged on a course with an average altitude of over 2,200 meters, Duo was satisfied with his performance.

"I've spent several months every year training with high-level African runners in Ethiopia since 2013, which has really helped me to progress," he said. "During my overseas training, I could keep pace with most of the sub-2:10 (marathon) runners. That is where my confidence comes from."

Duo first began to make an impression in marathon in March 2016, when he clocked 2:13:16 to book his berth for the Rio Olympic Games. Things didn't go quite to plan in Brazil, where he could only a register 2:24:22.

However, last March he improved his personal best to 2:10:31 by winning the Xuzhou Marathon in Jiangsu province to meet the entry standard for the Tokyo Olympics.

He then spent the entire winter training in Ethiopia and planned to run marathons in Tokyo, Seoul and Barcelona to prepare for the Olympics.

However, the COVID-19 pandemic forced Duo to abandon his race schedule and stay in his hometown in Tibet to continue his training.

His coach, Gesang Ciren, says Duo has been in solid form since his African training stint. Duo himself is hopeful of making further inroads over the next year in the buildup to the Tokyo Games.

"I am in very good shape now. And I am only 26," he said. "A lot of elite marathon runners reach their career peak after 30 years old. Waiting for one more year will not be a problem for me," he said.

"I will make good use of this year and go all out. My goal is to earn a top-eight finish in Tokyo next year."