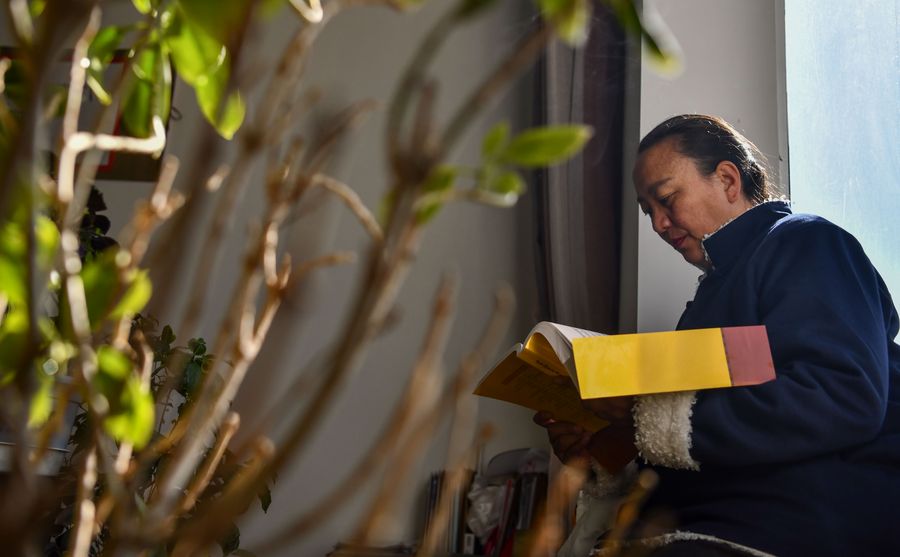 LHASA, March 8 (Xinhua) -- Sangey Lhamo, 52, from southwest China's Tibet Autonomous Region, has dual identities: a lawyer with 30 years of experience and a host of a popular video program as a lawyer. She is more recognized for her second identity since she believes basic legal knowledge is necessary for everyone.

Sangey Lhamo has been a successful woman with a well-known law firm of seven Tibetan lawyers, based in the regional capital city of Lhasa. Before that, she co-founded one of Tibet's first law firms.

"Tibet has experienced tremendous changes and I have benefited from the ever-increasing market that followed," she said. "The rights and interests of Tibetans are hard-won after Tibet abolished the serf system. Farmers and herdsmen should learn to safeguard their interests with the law and I'm willing to pay my dues to the society by helping them as a lawyer."

However, there is still a long way to go, said Sangey Lhamo. In 2010, the lawyer began her decade-long dedication to popularizing basic legal knowledge among locals.

From answering hotlines for those in search of legal assistance, writing blogs in Mandarin and Tibetan to share legal knowledge, to hosting audio and video programs, Sangey Lhamo always manages to come up with the most accessible ideas to reach a greater audience.

She especially cares about the female population who endured the worst suppression under the feudal system and gained unprecedented social status after the peaceful liberation of Tibet.

Sangey Lhamo gives priority to issues and disputes related to marriage in her weekly programs. Her most popular episodes are always followed by hundreds of likes and comments.

"I would like to express my sincere gratitude to Sangey Lhamo for her hard work and dedication," said an online comment in Tibetan. Sangey Lhamo also volunteers to answer legal inquiries online for her hundreds of followers.

Last year, the local government conferred upon Sangey Lhamo the title of Tibet's Female Role Model, which she considers as both an honor and an encouragement. "I hope my programs and blogs can serve as a legal dictionary for my fellow brothers and sisters when they have legal questions," she said.