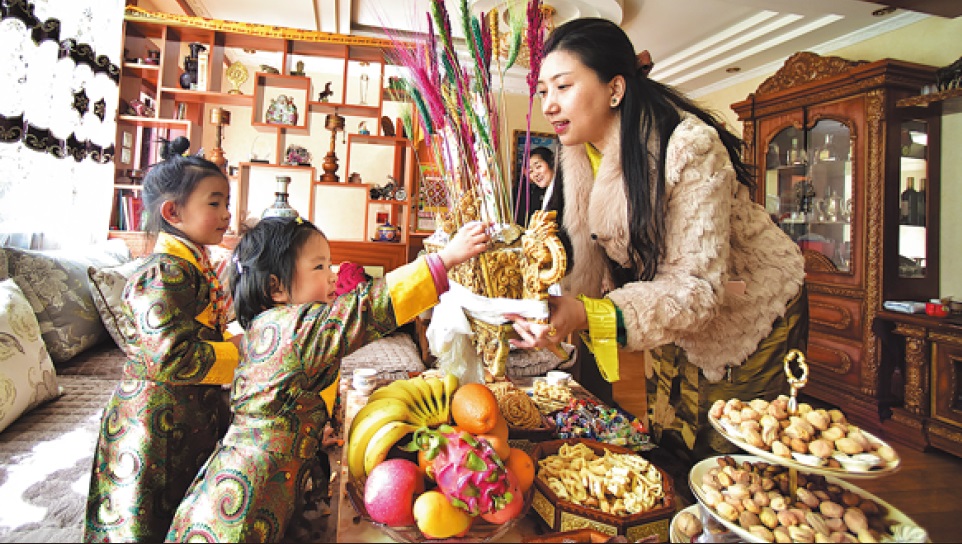 Dechoi, who lives in Lhasa, Tibet autonomous region, gives her nieces chemar, a mixture of roast barley flour and butter, in celebration of Tibetan New Year on Monday. TENTSEN SHINDEN / FOR CHINA DAILY

Losar, or Tibetan New Year, fell on Monday, marking the start of a two-week festival. What makes this year's festival unlike those of previous years is that most Tibetan people are staying at home to celebrate because of the novel coronavirus pneumonia outbreak.

The Tibet autonomous region was the last region on the Chinese mainland to report a novel coronavirus case, and the region's first and only patient was cured and discharged from the hospital on Feb 12.

The traditional festival of the Tibetan people, Losar marks the beginning of the Year of the Iron Rat.

As part of nationwide efforts to contain the epidemic, residents have been told to avoid crowds and gatherings. But that didn't stop them from celebrating.

Instead of visiting one another to partake of barley wine and chemar — a mixture of roast barley flour and butter — as a way to greet the season, such customs are largely being practiced via cellphone this year.

"The New Year is a little bit different as the country is still fighting the epidemic," said Pema Wangyal, a Tibetan resident of Chushul county.

"Many people in other parts of the country have suffered great losses. We send them our condolences," the 42-year-old said.

"I did all the preparations for the New Year, as usual, in my shrine room. I made all the offerings in front of the offering table, and the dining room tables have multiple choices of delicacies", he said.

To greet friends and relatives, he used text greetings or video chats. "Via video chat, we can toast each other with barley wine and beer. While not at the same table, we feel like we are together."

For his New Year's wish, Pema Wangyal said: "I hope all people will no longer need face masks. I want to see their smiles as soon as possible."