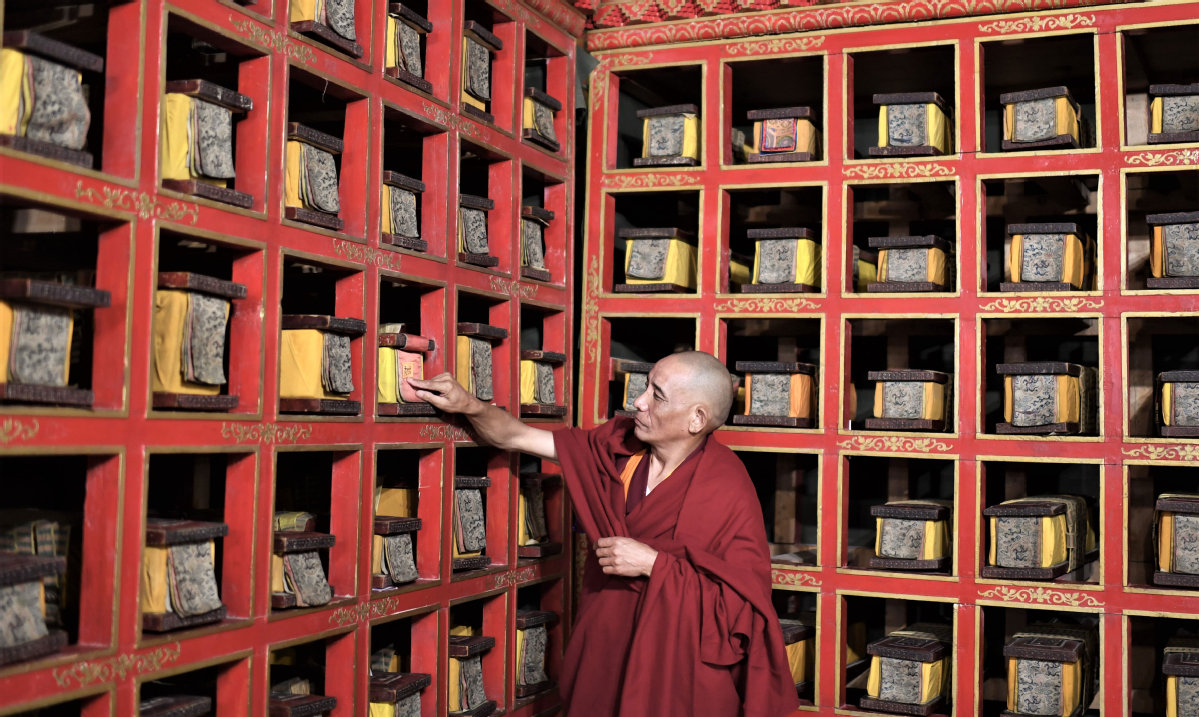 A monk at Potala Palace in Lhasa, Tibet autonomous region, identifies a set of ancient documents in November. [Photo/Xinhua]

LHASA - Over 18,000 precious ancient books written in the Tibetan language have been filed for future study and protection as part of a decade-long general survey in Southwest China's Tibet autonomous region.

Among the filed books, 291 have been selected for inclusion on the list of valuable ancient books of the state. A dozen of books on survey results have also been published.

China has hundreds of thousands of works of ancient Tibetan literature, with more than half of them collected in more than 1,300 temples, monasteries and libraries, museums and archives across Tibet.

"We have worked closely with over 1,200 collection sites and several thousand collectors during the survey," said Penpa Tsering, deputy director of the center.

Tenzin Guyzang manages a temple in Xigaze. Instead of the old way of preserving ancient books by shelving them, hidden from view, the books of indigo pages and golden characters are neatly labeled and displayed in glass cabinets.

He said the precious literature, over 40 works in total, now have their own unique "ID" and have been registered in the national database of ancient literature.

"Most of them were donated by private collectors over the past decade. Now under the guidance of experts, they are effectively protected," said the 53-year-old monk.

In June 2013, Nyishar, an expert with the center, received a call saying a large number of ancient books were on the brink of destruction in a dilapidated chapel in a village under Gyirong, a county on the China-Nepal border.

The village had no roads, electricity or optical cables connecting it with the outside world, and heavy snow was forecast, which would seal its isolation until the following spring.

Nyishar raced against time to reach the village. With the help of local villagers, he filed and restored all the 270 books, each having over 500 pages, in just 16 days.

He said the books were extremely delicate and contained large quantities of information about the society, economy, culture and folk customs from the 12th to 14th centuries.

The central and local governments have invested over 10 million yuan in ancient book protection in Tibet over the past decade. Besides the 18,000 filed books and nearly 3,000 restored pages, 14 local collection sites have been renovated and two protection stations built.

A digital standard for ancient Tibetan literature is being developed so that a database can be built for the benefit of the whole society, Penpa Tsering said.