The Sky Train, the Qinghai Tibet railway, the Qingzang Railway, it has many names, and has been traveled by millions of people since it was first opened. For centuries, Tibet was cut off from the rest of the world, lofty Himalayan mountains stretching along its western and southern borders, and the extreme elevation being a challenge for entry from the north and east. A land of extremes, in climate, altitude, and environment, Tibet was only accessible by road from around 1954, and even then, it took days or weeks to make the long journey from mainland China.

Then, in 2006, the underestimated construction of the world’s highest railway was completed, and a new doorway to Tibet opened up for travelers and goods. Stretching for 1,972 kilometers (1,225 miles) from its beginning at Xining in Qinghai Province to the terminus at Lhasa in Tibet, the Qinghai-Tibet Railway was officially opened on July 1, 2006, and has been running trains for the past 13 years.

These days most of travelers prefer to take the Tibet train to better acclimatize along the way and Tibet train become one of the best part of the Tibet tours.

After opening in 2006, trains began running to the plateau from 2-3 cities in China, starting with Xining and Beijing, and with others being added later on to increase the number of cities that could be used to access Tibet. Spread out across China, there are now seven gateway cities for train departures to Tibet. 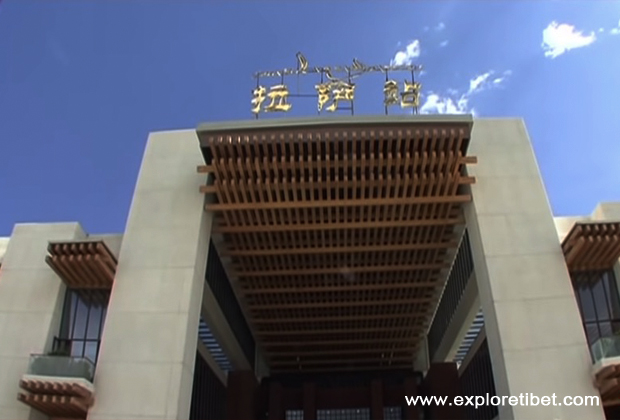 Train from Guangzhou to Lhasa.

The longest of all the routes to Tibet, the trains from Guangzhou depart daily from the southern Chinese capital of Guangdong Province. Trains depart at around 11:45am daily, and arrive in Lhasa at around 4:20pm on the thirds day of travel, more than 52 hours after leaving Guangzhou. Covering a distance of around 4,980 kilometers across China, the trains from Guangzhou are the most expensive of the seven routes, but are still mostly full throughout the year.

Train from Shanghai to Lhasa

Travel from Shanghai to Lhasa takes around 46 hours 15 minutes, and covers a total distance of 4,373 kilometers, the second-longest train ride to Tibet. Trains depart from Shanghai daily at around 8:10pm, and arrive in Lhasa at 6:25pm on the third day of the journey, the latest of all the trains to arrive in Lhasa. An immense journey across China, the train crosses eight different provinces to reach Lhasa. 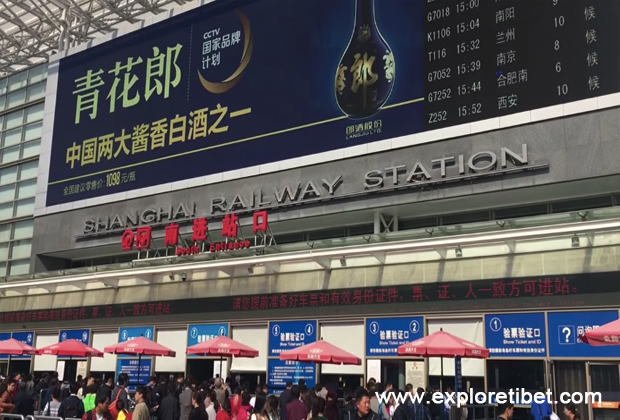 Train from Beijing to Lhasa.

One of the first cities in China to begin running the train to Tibet, Beijing is also one of the most popular departure locations for international travelers to Tibet, both for trains and flights. Departing at around 8:00pm daily from Beijing West Railway Station, the trains to Lhasa from Beijing take 40 hours 20 minutes to cross the breadth of China, arriving in Lhasa at around 12:20pm on the third day of travel. This vast journey covers a distance of 3,757 kilometers, and passes through the famous city of Xi’an along the route.

Train from Chengdu to Lhasa.

Possibly the most popular departure location for the train to Tibet, Chengdu in Sichuan Province is also one of closest cities to Tibet, though it is nowhere near the shortest railway journey yet. Trains from Chengdu depart every other day at around 9:37pm, and arrive in Lhasa at 9:55am on the third day after a trip of 3,360 kilometers. Taking around 36 hours 20 minutes to make the long, roundabout trip to Lhasa (Sichuan does lie right next to eastern Tibet), the trains from Sichuan will soon be taking a very different route.

Train from Chongqing to Lhasa.

Another departure location which only has trains to Lhasa every other day, Chongqing trains depart from the city at around 10:25pm and arrive in Lhasa at 9:55am on the third day. Another city that is also relatively close to Tibet to the west, trains from Chongqing travel round through Xining on their 3,050km, 35?-hour trip to the Tibetan capital.

Train from Lanzhou to Lhasa.

Train from Xining to Lhasa.

Xining is the start of the Qinghai-Tibet Railway and the shortest distance for any of the seven trains to Lhasa. Covering a distance of just 1,972 kilometers, the trains from Xining to Lhasa take just 20 hours 55 minutes to reach the Tibetan capital. Trains depart daily from Xining at around 2:00pm, and arrive in Lhasa at 10:56am the following day. However, in the peak season for tourism in Tibet, there can be up to four trains departing from Xining daily to cope with the heavier demand.

Railway Road from China to Lhasa

The World Records of the Qinghai Tibet Railway

The first railway to link the plateau with the rest of China, the Qinghai-Tibet Railway was built to connect the plateau and make it easier to transport people and goods to and from the region. However, in doing so, and building a railway that many engineers around the world said could not be done at the time, this unique railroad ended up breaking several world records. Based on the information given by the Guinness Book of World Records, the Qinghai-Tibet Railway currently holds no less than eight world records.

The World’s HIGHEST Railway- Around 960 kilometers of the tracks from Xining to Lhasa lie at altitudes above 4,000 meters (13,123 ft.). The highest point of the railway lies at an altitude of 5,072 meters (16,640 ft.), more than 200 meters higher than the previous highest railway in Peruvian Andes.

The World's LONGEST Plateau Railroad- The Qinghai-Tibet Railway has a total length of 1,972 kilometers, with the section from Golmud to Lhasa, which covers the plateau section, stretching for an amazing 1,142 kilometers (709.6 miles) as it zigzags its way across the vast Tibetan plateau, crossing both the Kunlun and Tanggula Mountains.

The World's LONGEST Track on Frozen Earth- More than 550 kilometers (341.7 miles) of this amazing railway was built on permafrost ground, more than any other plateau railway on the planet.

The World’s HIGHEST Railway Station- At an altitude of 5,068 meters (16,627 ft.) above sea level, the Tanggula Railway Stationis the highest railway station on the planet. The station is located just before the famous Tanggula Pass, the highest point of the entire railway.

The World’s HIGHEST Railway Tunnel- Known as the Fenghuoshan Tunnel, the world’s highest railway tunnel lies at an altitude of 4,905 meters (16,092 ft.) above sea level. It is also the most elevated tunnel on frozen ground in the world.

The World's LONGEST Plateau Tunnel- Not the Fenghuoshan Tunnel, but the Kunlun Mountain Tunneltakes the title of the longest plateau tunnel in the world. Stretching for a total of 1,686 meters (around 1.05 miles), the tunnel bores through the massive Kunlun Mountain Range in Qinghai Province, and is also the longest tunnel built through permafrost ground.

The World's LONGEST Plateau Railway Bridge- Stretching out for a total length of 11.7 kilometers (7.27 miles), the Qingshui River Bridgelies at an average altitude of 4,500 meters and crosses the unpopulated area of the Hoh Xil Nature Preserve.

The World’s FASTEST Train on Frozen Earth- Designed to reach speeds of up to 120-140 kilometers per hours on normal ground, the trains to Tibet can actually reach as high as 100 km/h on the frozen ground of the Tibetan plateau. Set as their maximum speed when traveling over permafrost ground, no other plateau railroad in the world has been able to reach such speeds.

Due to the highly developed railway network and safety guarantee, it is a good choice to travel to Tibet by train and also you can join in China Tibet Train Tours, through which you can explore the amazing vast landscape of Qinghai Tibet Plateau and other beautiful sights on the way to Tibet.