As one travels north along the river valley in Boidoi Township of Sangri County, Tibet, one quickly reaches the Kundeling Meadow, a famous highland meadow with an altitude over 4,300 meters above sea level. In the winding shrubs, a group of five or six red deer could be seen foraging with some domesticated yaks.

"Red deer is a second class national protected species. Twenty years ago, when the conservation district was established, the number of red deer started to grow. Now they are used to being with domesticated animals, and some aren't afraid of people at all," said Namgyal, a wildlife protection staff in the county.

The nature conservation district has made the area a true paradise for wildlife. The meadow in early May still has melting snow, but the wildlife is already eager to move.

During the travel, Himalayan marmot, a particular species on the Qinghai-Tibet Plateau which locals call "snow pig," could often be seen crossing the highway. These large rodent animals, after five or six months of hibernation, have been chubby and move skillfully among the meadow's caves. In addition, ruddy shelducks, having flown back from Yarlung Tsangpo River for spring, are busy seeking mates and building nests in the area. 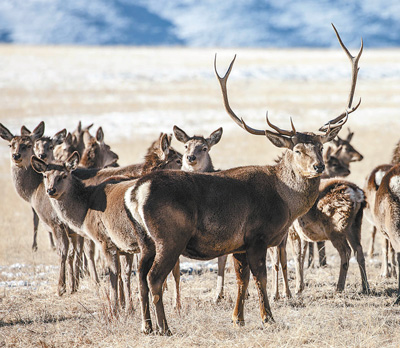 A group of red deer foraging on the meadow.