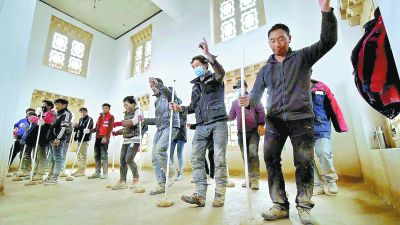 There are about 50 Tibetan workers holding stone tampers and singing song after song while working. They have worked for 18 days from 8:00 in the morning until 6:00 in the evening, all to make the stone-like a-gar gravel into flat earth.

Recently, the traditional Tibetan construction method “pounding a-gar” was used during the building of the Tibet Garden at the 2019 Beijing International Horticultural Exposition to be open on April 29.

“Pounding a-gar” is usually called  “traditional Tibetan dance on construction site”, and it is a way of building the roof or floor of a Tibetan house, in which a kind of local soil called a-gar is mixed with gravel, water, honey, and butter. After mixing the materials together, it is spread on the ground or roof, then repeatedly beaten by workers using the stone tamper until it is firm and smooth and won’t leak.

One architect said that the tool used in “pounding a-gar” is a fairly hard sesame stone. This kind of stone is very practical and popular in Tibetan-inhabited areas. “Pounding a-gar” is just the first step in constructing a floor or roof. There are also several key steps such as wiping it with a cloth, soaking it with bark water, covering it with a special liquid, and wiping it with a red cloth. At the end, the ground or roof is slightly red, its texture and color consistent with temples and palaces in Tibetan areas.

While constructing the Tibet Garden, many architectural materials are from Tibet, including wood, stone, and unique building materials like pema grass, which is only used in palaces and temples in Tibetan-inhabited areas.

In addition to these Tibetan construction materials, mural pigments used are also from Tibet. Seven mural artists who have worked on murals in Tibetan monasteries and ancient buildings are invited to work for the Tibet Garden of   2019 Beijing International Horticultural Exposition.