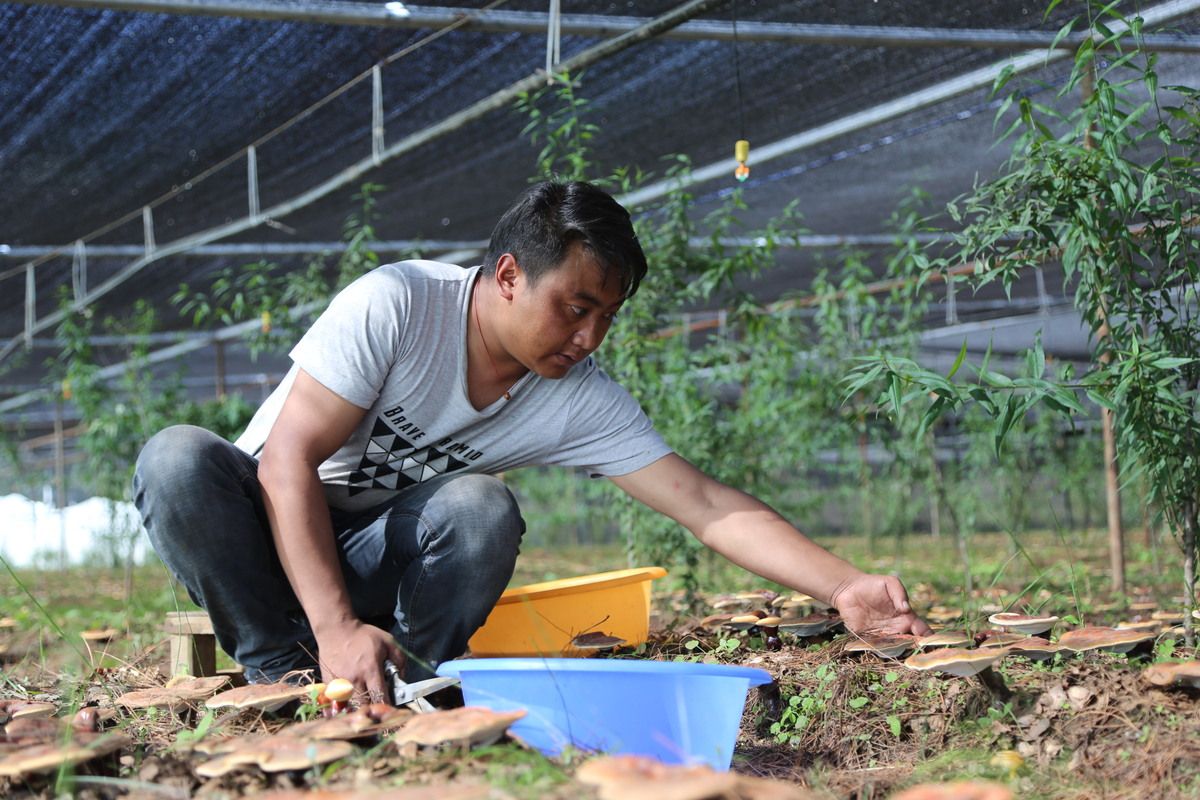 Farmers in the Tibet autonomous region's Nyingchi have been collecting medicinal herbs for years. Now they are using them to heal their poverty woes.

Manling county, which has a history of at least 3,800 years, is synonymous with Tibetan medical culture. Historical records show Yuthok Yonten Gonpo, the founder of traditional Tibetan medicine, trained practitioners and dispensed medicines in Manling, and wrote about its achievements in ancient times.

One of the reasons Manling is so integral is its abundance of medicinal herbs. It grows an estimated 3,800 types of plants and 680 kinds of macrofungi.

In 2010, the county government took measures to make the area a center of Tibetan medicine.

"It's become harder to find naturally grown herbs in high-altitude areas since the market demand has risen," he said. "I felt that Tibetan medicine's development would have no future if no measures were taken to preserve these herbs.

"Herbs have big business potential, as the Tibetan medicine market is growing. I also want to help protect traditional culture."

His plantation grows six kinds of herbs and sells them in other parts of Tibet and neighboring Yunnan province. Buyers are mostly Tibetan medical institutes, but they are also popular among tourists. Last year, the business made more than 300,000 yuan ($43,200).

Nyima, who is well-known in the region, said he did not expect such success. The 52-year-old, who hails from Gyaltse county, had a difficult childhood. He had no chance to go to school, so he learned how to read and write Tibetan while working in a monastery as a carpenter.

When he was 19, he had an opportunity to work for the government in Manling, where he met his wife and decided to settle down. He also worked at chicken farms, pig farms and apple orchards before starting his herb business. The venture has not only made his family better off but also helped many impoverished locals.

Nyima employs nine workers and four technicians, as well as some part-time workers at peak periods. Workers are paid 180 to 220 yuan a day, while the technicians receive 6,000 yuan a month, he said. At least 19 poor families have benefitted from working at his farm.

He has also built two greenhouses and allows villagers to use them to grow herbs for free. Lodre has worked at the farm for three years. He expressed his gratitude to Nyima as the job is not tough but the salary is satisfying.

"Before coming here, I'd worked on construction sites for years. The jobs were mostly heavy and risky, but now my family is very pleased," the 31-year-old from Shigatse said.

According to the Manling government, the county's eight townships all now have herbal plantation companies as well as communal village plantations.

Nyima said the county has promised to invest 1.68 million yuan to expand his farm, allowing it to play an even bigger role in the development of Tibetan medicine and poverty alleviation.