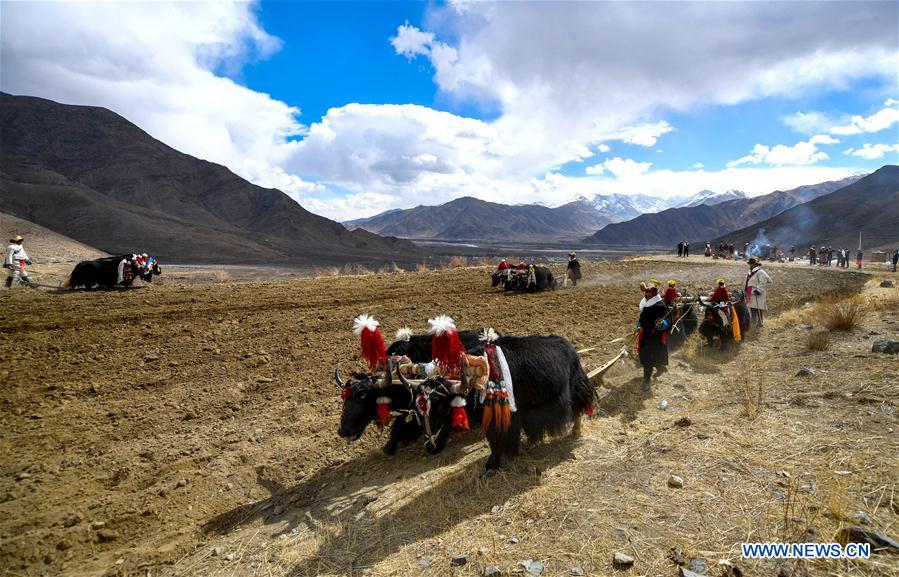 Growing 1,000 meters above sea level on the Qinghai-Tibet plateau, highland barley has been filling the bellies of Tibetans for generations. Now the plant is also bringing them wealth.

Tsering Yangzom, 30, was busy gathering in highland barley over the weekend. She expects to harvest 1,200 kg this year. Besides the portion she keeps for her family, she intends to sell the rest to a local processing factory, which will bring nearly 1,000 yuan ($145) of extra income.

Lhorong in Tibet's Chamdo City is known for its quality highland barley. With nearly 4,000 hectares of highland barley, the county is called "the granary of east Tibet." About 55,000 people are engaged in the production and processing of the grain.

After harvest, the highland barley will be washed, dried, roasted and ground into flour-like tsamba -- the most popular staple food in Tibet. Since last year, Lhorong tsamba has been granted a geographic indication and is thus protected.

Farmers used to keep most of the yield as the staple food for the next year. However, as new breeds of high-yield barley were introduced, farmers are able to sell their surplus to a local tsamba company, where the grain is processed into flour, noodles and biscuits.

Tsering Dhondup, the general manager, said the company purchased 800,000 kg of highland barley from local farmers last year, and is expected to purchase 1.5 million kg this year, thanks to a booming market and expanded production.

More than 1,000 households sold their barley to the company at 30 to 40 percent higher than the street price. The selling price of registered impoverished households was even higher, according to the local government.

Among the 30 employees of the company, 28 were from registered impoverished families. Due to the stable income of the job, 18 of them have been successfully lifted out of poverty. The expanded recruitment is expected to help another 50 to 80 low-income residents shake off poverty next year.

Lhosong used to be a farmer before joining the company as a driver in 2011. His monthly income was instantly boosted to 2,500 yuan from less than 500 yuan previously. This year, he introduced his fiancee, also from a poor family, to work in the company.

After years of work, he used his savings to build a two-storey house for the whole family, and buy a second-hand car for himself and a tilting cart for his father to do part-time contracts.

"Even though I don't make direct contact with highland barley nowadays, my job and a relatively well-off life only exist because of the plant," the man said.

Like Lhosong, many families in Lhorong have bid goodbye to poverty thanks to highland barley. According to the local government's work plan, the whole county will overcome poverty by the year-end.

"In addition to other parts in Chamdo, our barley seeds are sold to the neighboring provinces of Sichuan and Qinghai. Our tsamba biscuits even board the planes of Tibet Airlines and fly across China as inflight snacks," said Soinam Tsering, head of Lhorong's agriculture and animal husbandry bureau.