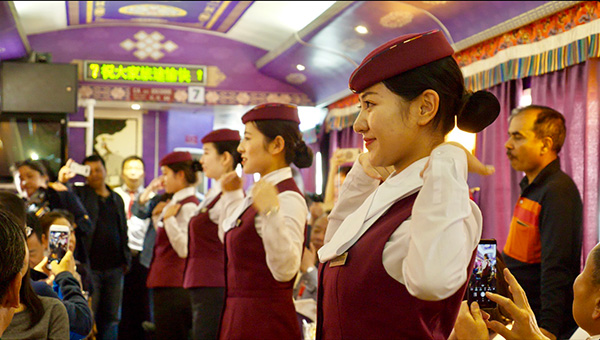 Cabin crew on one of the tourism trains along Tangzhu Road. [Photo/China Daily]

The ancient Tangzhu road ran from Tang Dynasty's (618-907) Chang'an (today's Xi'an) across Qinghai and Tibet to Nepal and India, and was part of the ancient highland Silk Road.

The autonomous region has recently launched a tourism train connecting its Shigatse to Qinghai province's Xining, and plans to open another one between its capital Lhasa to Shaanxi province's capital Xi'an next year, said Wang Songping, director of Tibet tourism development commission.

Tibetan music, art performance and food would be offered on those trains to better showcase the image of the autonomous region to travelers.

The development of ancient Tangzhu road and relevant modern transportation could help Tibet become an important hub in the country's Belt and Road Initiative, Wang added.

The tourism train that runs between Lhasa and Shigatse in Tibet along the ancient road received more than 1.4 million passengers from July 2017 to June 2018.