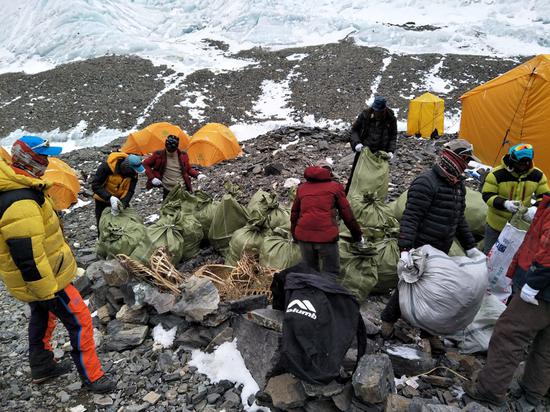 Members of the environmental squad collect trash at base camp on the north face of Qomolangma. (Photo by Awang Tashi/Xinhua)

The Himalayas, with their jagged peaks, attract many hikers and adventure seekers eager to explore the pristine setting - but the trash they leave behind threatens to make the area less picturesque.

An environmental squad on Qomolangma - known as Mount Everest in the West - was established this year with 30 members in the Tibet autonomous region.

Dondrup collects trash at the base camp on the north face of Qomolangma, the world's highest peak. In the offseason, he is a doctor in Tosanglin village at the foot of the mountain, but he has been working as a trash collector during the climbing season for three years.

Most of the squad are guides or liaison officers from climbers' associations. Dondrup is one of only three locals on the team. The trio work from 5,200 meters at base camp to 6,500 meters. A single collection expedition can take eight hours.

"We do a lot of walking. One worker collects up to 10 kilograms of garbage each day," said Dondrup, who looks older than his age due to constant exposure to the mountain sun in a low-oxygen environment, which has left his face leathery and wrinkled.

He is paid 4,500 yuan ($715) a month, which is not much compared with villagers working in other sectors.

"I don't do it for the money. My family has lived here for generations so I feel it is my job to protect the mountain," he said.

"A lot of tourists and climbers come now and leave a lot behind. We must work hard to keep up."

The climbing season starts around the end of March and ends at the end of May on the north face. After the season ends, a cleanup campaign is carried out at elevations above 5,100 meters.

Everyone descending the mountain needs to carry at least 8 kg of garbage with them. If their garbage weighs less than that amount, their pay is reduced.

Penma Trinley, deputy director of the Tibetan Mountaineering Association, said garbage dumped on the mountain was usually carried down the following year when the climbing season resumed and climbing was safer.

"Now that we have an environmental team, we are much more efficient. We do not wait a year to process the garbage but do it throughout the climbing season," he said.

Similar cleanup teams are to be set up on Qowowuyag and Shishabangma, two mountains also over 8,000 meters high, he added.