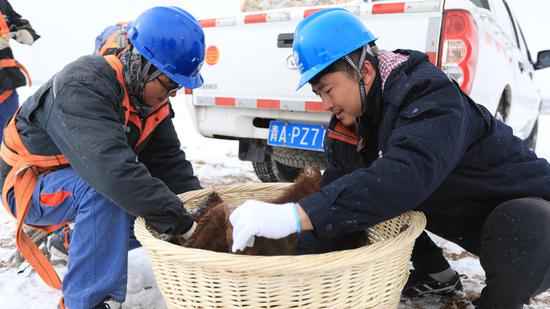 Workers assemble an insulated nest that prevents birds from being injured or killed on electrical towers. (Photo for China Daily/Zhu Yiran)

Perched atop a 50-meter electrical tower, two birds fly out of an artificial nest into the open air.

"There are eggs in the nest!" shouts Wang Hui as he checks the tower's power lines.

Wang, who works with the State Grid branch in Qinghai province, has been assigned to check the operating condition of the power grid connecting Xining in Qinghai with Lhasa in the Tibet autonomous region. The project, which began in 2012, spans 2,530 kilometers.

While the project has guaranteed electricity for locals, the towers have been troubled by one thing－birds.

"The project crosses the Hoh Xil Nature Reserve, where a lack of tall plants has forced birds to make nests on the electrical towers," Wang said. "Many birds have been killed or injured due to the high voltage, and the electrical circuit frequently breaks because the birds rest on the lines."

"In the beginning, the workers placed sharp objects and mirrors on the towers, but this created more problems," Wang said. "Some birds were injured or even killed."

To keep birds from dying, authorities of the State Grid branch came up with an innovative solution: build artificial nests in the safe areas of the towers.

Eighty-six nests have been placed so far, and 50 more will be installed this year.

"We found that all our nests attract birds," Wang said. "Some birds have even hatched their eggs there."

"We had two choices: Either install safer repelling objects and insulate the circuits better so the birds don't get hurt, or we just put our own nests up."

The nests measure 80 centimeters in diameter and are made of rattan, a flexible type of palm. Workers like Wang Hui carry the nests on their backs as they climb the towers, placing the nests on tower platforms.

"We usually put a little mattress made of coir, the fibrous material found on coconuts, in each nest," Wang said.

It is typically cold at such a high altitude, and workers must cut chunks of ice off the tower frames while climbing. The entire process can take half an hour.

"By using artificial nests, we not only lowered the possibility of birds getting hurt but the lines have more stable power transmission," Wang said.

Since the measures were taken, the number of power outages has been reduced to twice a year on average, according to the State Grid. Since August, there have been no reports of power outages because of birds. An extra 2.65 million kilowatt-hours of electricity is transmitted on average every day.

"We will continue to improve how we protect the birds, so that humans and birds can coexist in harmony," said Yuan Zhiyi of the State Grid branch in Qinghai.