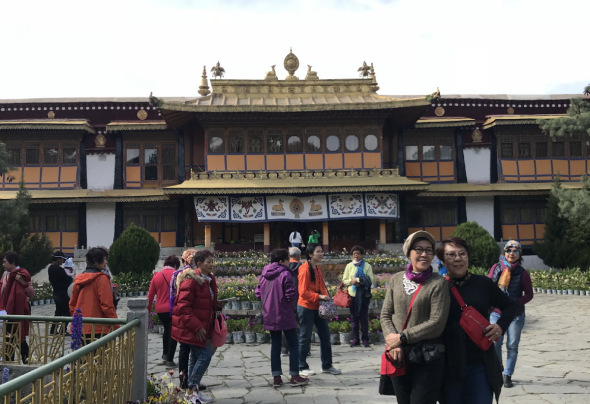 Travelers can continue to enjoy discounted tickets at major scenic spots and for transportation in the Tibet autonomous region until the end of June because of a surprising jump in tourism activity in the past three months, according to its Tourism Development Commission.

The major scenic spots are 26 attractions at 3A, 4A and 5A levels around Tibet, including the Jokhang Temple in Lhasa and Qomolangma National Natural Reserve (Mt. Everest).

The Potala Palace in Lhasa was excluded because of its extremely heavy flow of visitors.

Heavier tourism has been attributed to a promotional activity called "Visiting Tibet in winter and enjoying the planet's third pole". The promotion ran from February to April. It was designed to attract more travelers in the offseason.

Tibet's low tourist season generally ranges from November to the following May－a time when it's much colder in the plateau areas.

In addition, the price of rooms at 151 hotels with three or more stars was to be no more than half what was charged in the same period a year earlier. Visitors could also receive discounts of 50 percent or more for tourist vehicles. Airfares for Tibet Airlines' economy class inbound flights were also reduced.

The policies produced the desired result. According to the region's tourism commission, 2.67 million travelers visited Tibet from January to April, and tourism revenue hit 3.5 billion yuan ($549 million)－a year-on-year increase of more than 60 percent in both categories.

Gunga Choidron sells tickets at Norbulingka Palace, a 4A-level attraction in Lhasa. During the half month since May 1, there have been more visitors to the spot than in previous years, she said.