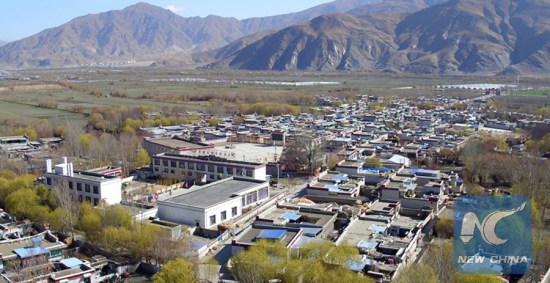 Two hours of drive southeast from Lhasa, capital of Tibet Autonomous Region, brings one to Khesum village, situated amongst the mountainous landscape along the Yarlung River valley.

Small as the village is, with a population of just 700, Khesum was the starting point of sweeping democratic reform in 1959, which ended feudal serfdom under theocracy and began a new chapter for the plateau region in southwest China.

On June 6, 1959, 302 serfs in the village, clad in rags, elected the preparatory committee for the first association of peasants in Tibet. The day marked the beginning of community-level democracy in Tibet.

Serfs' Emancipation Day is celebrated in Tibet on Wednesday. During the reform, more than one million people, or 90 percent of the region's population at that time, were emancipated from the feudal serf system in 1959.

In Khesum, there are about 100 elderly villagers who lived through the reform period and all of them had been serfs. The dark pages of history have turned, but they should never be forgotten, the elderly villagers said.

Sonam Dondrup was a serf until the age of 16, and his memories of the old days have barely faded. "I got up before the sunrise to work in the fields. I could never be late. If I was late, I would be whipped," he said.

"After the landowners ran away, no one had any idea what the future would bring. It was not until my family burnt the land contract and the debt papers that the idea of liberation finally sank in," the now 75-year-old man said.

Sonam Dondrup now lives in peaceful retirement. Every morning, he takes his great-grandson to kindergarten and then goes to the nearby Changzhu Monastery to pray.

Penpa Tsering, Communist Party secretary of the village, said Khesum is one of the most developed villages under the jurisdiction of Changzhu Township in the city of Shannan.

It has 55 students attending the local kindergarten and school. Over half of the families have cars. Per capita annual income in 2017 was around 17,000 yuan (about 2,700 U.S. dollars). No one lives under poverty line.

A bare-footed man suffering from extreme starvation stole a plate of dog food. When the theft was discovered by a steward, the man received a whipping. This scene was everyday life in Khesum about 59 years ago. Now it only exists on stage.

In Shannan, actor Tsewang Lodro, 37, plays Trilai, the serf, in the one-hour play "The Tears of Serfs", which was staged on Tuesday.

"I've spent a lot of time rehearsing this month. It satisfies me that my acting makes the audience cry at the destruction and despair, and laugh at the ridiculous and funny," Tsewang Lodro said.

Director Basang Tsering said writing the script for the play was easy. Almost every family had memories. "My job was to collect the stories and guide the actors and actresses to render them in an artistic form," he said.

Conditions of serfs and slaves in Tibet have been documented in many historical records and traveler's tales.

"Young people may feel uncomfortable seeing the scene on stage, but the history of Tibet was more cruel than what is shown here," said Sonam Londrup, an audience member.

Grandmother Chiga was one of the first few females to become Communist Party members in Khesum in 1959. Until she passed away in 1995, she was one of the revered villagers.

"Mother was shy. She was elected to the village committee to represent the interests of women. She was a serf, and used to say 'I did not grow up eating tsampa [dough made from barley flour], but eating bitterness, being beaten and cursed,'" said Losang Qozom, her daughter.

"When the committee convened meetings in the hall where the master previously resided, my mother hesitated before entering. It was dark and a forbidden space for women," Losang Qozom said.

Losang Qozom, 56, still lives in Khesum. She has three daughters and proudly shares their achievements. Two of them hold university degrees and the youngest works as a doctor at a local clinic.

Second daughter Baima Tsenyi, 26, graduated from Yunnan Normal University last year and is now studying to become a kindergarten dance teacher. Over 130 people in the village hold university degrees, and another 50 are currently studying in universities around China.

The Yarlung River flows near the village, and nurtures fertile farmland. Khesum has about 93 hectares of land in the river valley and farming is highly mechanized.

"Khesum will see new opportunities with the rural revitalization strategy. We will continue to protect the environment, while developing the local economy," said Nima Tsering, Communist Party Secretary of Nedong District in Shannan.

About 370 people from the village work in nearby towns. "We are also faced with an aging society. We will try to build good businesses in the village and keep the young people here," said Penpa Tsering.