The rarely seen masterpiece Bunian Tu, also known as Emperor Taizong Receiving the Tibetan Envoy, is on show at an ongoing exhibition in Beijing.

There was an air of mystery about the Tibetan History and Culture exhibition at the Capital Museum in Beijing on Tuesday as the catalog of the event was not released until after its inauguration.

But it seems to have been worth the wait as a rarely seen masterpiece titled Bunian Tu, also known as Emperor Taizong Receiving the Tibetan Envoy, is on show at the event and will remain there for two months.

The 1.3-meter-long silk scroll is generally believed to have been painted by Yan Liben, an artist and official in the Tang Dynasty (618-907), but some scholars say it is a facsimile of Yan's work from the Northern Song Dynasty (960-1127).

"It's really a treasure," says Han Zhanming, director of the Capital Museum.

"The painting is one of the 10 most celebrated surviving paintings from ancient China," he says.

The work, now part of the collection of the Palace Museum in Beijing, reflects the close connections between the Tang court and Tibet, which was then the kingdom of Tubo.

In the painting based on a historical event, Emperor Taizong of the Tang Dynasty meets Gar Tongtsen Yulsung (also known as Lun Dongzan in historical records), who was then the envoy of the Tubo ruler Songtsen Gampo.

At that time, Songtsen Gampo proposed a marriage alliance with the royal family of Taizong.

Consequently, Princess Wencheng, a member of the Tang royal clan, was given in marriage to the Tubo ruler, a move which greatly enhanced the cultural and political ties between the two powers.

The masterpiece on show is one of the 216 cultural relics on display at the ongoing exhibition, which have been borrowed from 21 institutions nationwide, according to Han.

He says 90 percent of the exhibits are national-level precious cultural relics.

Many exhibits have been borrowed from sacred religious sites in the Tibet autonomous region, including the Jokhang Monastery in Lhasa; the Tashi Lhunpo Monastery and Sakya Monastery, both in Xigaze. None of the relics have been publicly displayed in a museum before.

Despite its reputation, the Bunian Tu has not overshadowed the other treasures on display.

Instead, it is like a guide ushering visitors into a show of Tibetan history and culture.

For example, a Qing Dynasty (1644-1911) thangka - Tibetan Buddhist painting on cotton or silk applique - records how Princess Wencheng entered Tibet and how the Jokhang Monastery was built following her arrival. 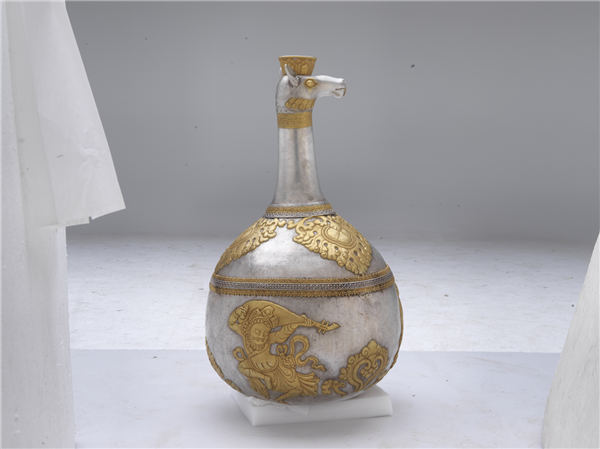 A silver kettle from Jokhang Monastery is among more than 200 precious relics on display. (Photo provided to China Daily)

Speaking about the thangka piece, Zhang Jie, curator of the exhibition, says: "It's like a comic book connecting many key events, and thus has huge significance as a historical reference."

However, Zhang says all important witnesses to history do not necessarily have to be artworks, and he recommends an epigraph carved on stone, which was unearthed in Beijing.

It records that Lun Boyan, a descendant of Lun Dongzan, once served as a border official for the Tang court.

During the Tang Dynasty, today's Beijing was a frontier area.

"The epigraph says that many other members from the family also defended the borders for the Tang court," says Zhang.

"The sons of a Tubo noble also worked for the Tang court. That clearly shows the close relationship between Tibet and inland areas at that time."

He also points to other exhibits that show such links.

He says a copper government seal from Lhasa during Mongol-led Yuan Dynasty (1271-1368) shows the rule of China's imperial government over Tibet.

And, a letter sent by the Tashi Lhunpo Monastery to Emperor Qianlong in the Qing Dynasty conveys the local people's gratitude for the imperial government's efforts in fighting foreign invaders.

Dwelling on the theme, Han says: "We (through the exhibition) want to show that the culture of the Tibetan ethnic group has a crucial place in Chinese culture as a whole.

"Tibetans play an important role as different ethnic groups form the Chinese people, which is unity in diversity."

Han expects the exhibition to help people better understand the importance of cultural diversity and to safeguard national unity.

Tibetan Buddhism is also a key theme at the exhibition which juxtaposes many sutras, Buddhist statues and other religious artworks. 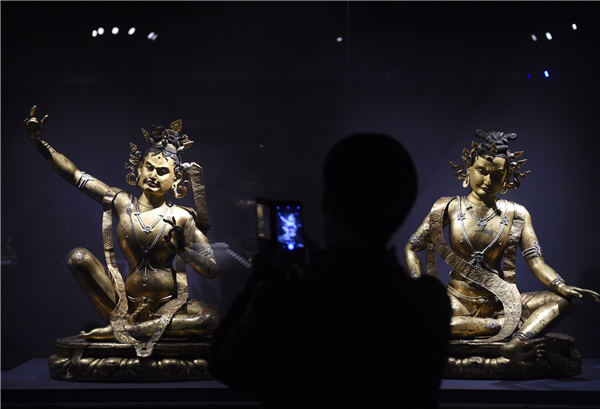 Many Buddhist statues make their exhibition debut at the ongoing event. (Photo provided to China Daily)

A huge embroidered thangka from Jokhang Monastery on Yamantaka, a Tibetan Buddhist deity, is one of just three surviving works in the world, and clearly indicates the reign of Emperor Yongle in the Ming Dynasty (1368-1644).

A similar thangka in a private collection was sold for 310 million yuan ($49 million) at an auction in Hong Kong in 2014.

The earliest woodblock printed Buddhist scripture in Tibetan, also from Yongle's time, is also on display.

The edition was printed in Nanjing, capital of Jiangsu province, following an edict and the emperor wrote the preface for it.

Also on display is a silver kettle from Jokhang Monastery - a holy item for pilgrims - decorated with images, which are believed to have originated in West Asia.

Despite the focus on Buddhism, Zhang says the exhibition also tries to go beyond the period when the religion dominated Tibet, and tries to focus on the early history of the land. Major archaeological discoveries in Tibet in recent years are also being showcased.

For instance, the earliest found remains of tea leaves in China and silk pieces featuring the Chinese characters wang hou (prince and marquis), which were unearthed in Ngari prefecture and date back to the third century AD, show communication between Tibet and the inland areas, and are being showcased at the event.

A gold mask used for burial, also from the same period in Ngari, is linked to the Zhangzhung kingdom, and echoes customs of grassland civilizations across Eurasian lands.

"We want to correct a common stereotype that Tibet was a relatively inaccessible place in ancient times due to harsh geographic conditions," Zhang says.

"There was a branch of the ancient Silk Road route on the plateau. And it facilitated frequent cultural communication between Tibet and the outside world."

After all, while Lun Dongzan in Bunian Tu wore clothes from Sogdian (an ancient Iranian civilization) when meeting a Tang emperor, how can you believe that Tibet did not embrace different cultures in ancient times?

9 a.m.-5 p.m., closed on Mondays, through July 22 (some exhibits will be displayed for a shorter period). Entry is free of charge but online or phone reservation for the exhibition is needed (at least one day in advance). Hall B, 1st Floor, Capital Museum, 16 Fuxingmenwai Avenue, Xicheng district, Beijing. 010-6339-3339. www.capitalmuseum.org.cn