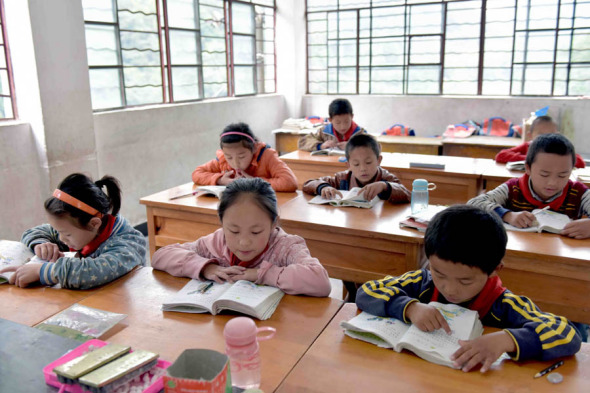 Students read at a primary school in the Gongshan Derung and Nu autonomous county, Yunnan province. The area is among the places suffering from extreme poverty to which educational funds will be diverted. (Photo: Xinhua/Yan Zongyou)

As China steps up its efforts to eradicate extreme poverty through allocating more educational resources to poverty-stricken areas, the goal is for no child in China to be prevented from attending school because of poverty by 2020, the Ministry of Education said on Tuesday.

New educational funds, programs and policies will support places where extreme poverty persists－including the Tibet autonomous region, parts of the Xinjiang Uygur autonomous region and the provinces of Sichuan, Yunnan and Gansu－to help markedly elevate educational standards in rural China by 2020, according to a guideline published on the ministry's official website.

"The country will establish records on each child's education situation in these areas as the basis for targeted poverty alleviation through financial input and policy support," the guideline said.

Each county in such areas should also keep records on educational resource shortages, including facilities and teachers.

Each township should have at least one public kindergarten, while each prefecture-level city should be equipped with at least one vocational school within the next two years, according to the guideline.

Students from poor families will enjoy priority enrollment at local vocational schools. They will also be given preferential treatment in future internships and job recommendations.

Students from western regions who are enrolled in vocational schools in eastern China will get 4,000 yuan ($634) in annual subsidies from local governments, the guideline said.

Chu Zhaohui, a researcher at the National Institute of Education Sciences, said the guideline is a step in the right direction, as education offers a sustainable solution to poverty alleviation.

"Past experience shows that vocational education is one of the fastest and most effective means to reduce poverty as children in poverty-stricken areas are more focused on getting jobs than taking tests," Chu said.

Concerted efforts should be made to prevent early dropouts at secondary schools, while more teachers who speak both standard Mandarin and ethnic languages are also needed to improve educational standards in areas inhabited mainly by ethnic groups, he said.

The country has invested large sums of money to build schools in often-overlooked small towns and villages, as well as on subsidies for deserving students, Chu said. "However, what is more important than financial support is to change the mentality of poor families so that they can realize the crucial and often long-term role of education in improving their living standards."

In China, targeted poverty alleviation has been a focus of nationwide efforts in recent years, lifting more than 10 million people out of poverty annually. The country has set 2020 as the target year to finish building a moderately prosperous society and eradicate extreme poverty.