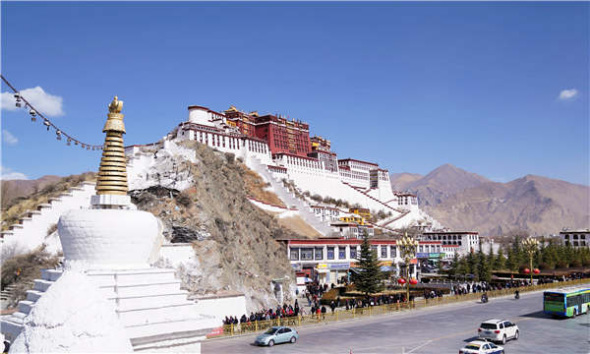 People wait in line in front of the Potala Palace in Lhasa in the Tibet autonomous region on Wednesday. (Photo/Xinhua)

Steep discounts on hotels, air tickets and fees for scenic spot admissions will be offered to travelers visiting Tibet over the next three months, a news release by the government of the Tibet autonomous region said on Thursday.

The preferential policies for tourists echo the initiative of "winter tours in Tibet－enjoy the world's third pole"－launched by local authorities at a news conference.

From Feb 1 to April 30, the government-sponsored initiative includes seven areas covering visitor transportation and accommodation. It is also an important addition to the region's overall planning for tourism development.

A-class tourist attractions in the region including the Potala Palace will open to visitors for free during that time; prices of three-star hotels and above will drop by 50 percent compared with the year earlier; and vehicles for rent will also be 50 percent off from the peak season.

Nearly 26 million visitors from home and abroad traveled to Tibet in 2017. Revenues generated by tourism reached 37.9 billion yuan with a year-on-year increase of 14.7 percent.